28/07/2021 - Tomás Seoighe’s docu-drama is a gripping film blowing the lid off the story of Patrick O’Donnell, the Irish republican executed for the murder of James Carey in 1883

One of the films world-premiered at this year’s Galway Film Fleadh (20-25 July), Ireland’s leading festival, was Tomás Seoighe’s debut feature, The Queen v Patrick O’Donnell [+see also:
trailer
film profile]. This very well-researched docu-drama tells the complex story of how Patrick O’Donnell, a man from the Donegal Gaeltacht with no overt political affiliations, came to shoot and kill one of the leading figures of the assassination squad known as “The Invincibles” (and Ireland’s most notorious informer), James Carey, on a ship off the coast of South Africa in 1883. Carey previously betrayed The Invincibles, following their murder of high-ranking state officials Lord Frederick Cavendish (Seamus Hughes) and Thomas Henry Burke (John Keane) in Dublin’s Phoenix Park on 6 May 1882.

The movie, whose structure is linear and easy to follow, alternates “talking heads” sections featuring prominent experts in Irish history (most of them are Irish speakers, too) with a number of masterfully crafted staged sequences depicting both the confirmed historical facts as well as the different testimonies of Carey’s murder along with the main events leading up to the crime.

Interestingly, the film contains new evidence from British Home Office files kept under wraps for over a century, and does a great job of explaining how a quiet-spoken, humble man from Donegal became a rebel, a murderer, a national hero and, ultimately, a legend, today still remembered through the popular folk ballad “Pat O’Donnell from Donegal”. Later, we also find out more about the mysterious woman posing as his wife, Susan Gallagher (played by Bridin Ni Mhaoldomhnaigh), and the heartfelt pleas made by then US President Chester A Arthur (O’Donnell was also an American citizen) and French writer Victor Hugo, which, however, did not help the man to escape his death sentence.

While the historical topics and the judicial case themselves may resonate more with an Irish audience, the numerous talking heads taking part in the movie manage to imbue the picture with a plain style of storytelling which might be able to hook overseas audiences as well. Moreover, Seoighe’s mise-en-scène is simple but elegant. The decision to use a black backdrop in all of the court-set scenes is quite effective: it gives a good sense of theatricality but also produces the feeling of looking at silhouettes printed on the page of a history book. In conclusion, Seoighe’s debut is a gripping viewing experience, which will satisfy the appetites of lovers of history documentaries, enriched by a pinch of intrigue and courtroom drama.

Tomás Seoighe’s docu-drama is a gripping film blowing the lid off the story of Patrick O’Donnell, the Irish republican executed for the murder of James Carey in 1883 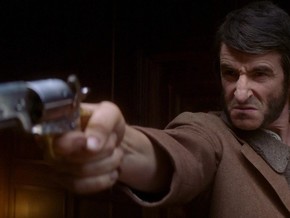