Review: Things Worth Weeping For

23/08/2021 - This eccentric dramedy portrays a female “quarter-life crisis”, where becoming an adult in an overly predictable manner feels like a hugely dull prospect

Male midlife crises featuring an uncontrollable desire to abandon every single responsibility have been so widely covered in cinema – from John Cassavetes’ cult flick Husbands to Thomas Vinterberg’s recent Oscar winner Another Round [+see also:
film review
trailer
film profile], and hundreds of other takes in between – that the well-known phenomenon of this late, desperate rebellion is now par for the course in film. But few things have been said at all about girls at the threshold between youth and maturity, females who are not really eager to dive into the bourgeois holy trinity of career, marriage and kids – Joachim Trier’s latest The Worst Person in the World [+see also:
film review
trailer
interview: Joachim Trier
film profile] probably being the closest reference.

Hungarian-Romanian director Cristina Grosan’s feature debut, Things Worth Weeping For [+see also:
trailer
interview: Cristina Grosan
film profile], which has just premiered in the Sarajevo Film Festival’s feature competition, intimately yet delicately observes the existential hesitations of 30-year-old Maja, a daydreamer with a wandering mind and a lack of attention who needs a break before eventually focusing on her life goals. Especially when the prospects she is faced with include a mortgage she’d have to pay up until retirement for a flat with a non-existent view of a wall and a boyfriend who is obviously determined to become a good husband and father, but who has a limited imagination in terms of any further options. Maja’s subconscious is already protesting against this socially engineered plan by making her forget to bring her ID for the signing of the mortgage contract, thus leading her to sabotage this “bright future”, at least for a while. However, what really launches her into a different orbit is the sudden death of a lonely relative, with whose corpse, head dangling over the kitchen table, she spends some elusive quiet time, embarking on an introverted journey through her controversial emotions. These several hours, in equal parts frightening and relaxing, offer her the chance to reflect on the limbo between youth and adulthood and drown in hesitation, further nurtured by some casual flirting with a locksmith and the company of an immature friend whose life seems to be a mess, as well as by the sudden reminder that life could end abruptly at any time and one better live it by listening to one’s gut feeling.

Natural-born talent Nóra Rainer-Micsinyei (Garbage Theory, Treasure City [+see also:
film review
trailer
film profile]) plays Maja with genuine verve, probably because, being a co-writer of the script, she fully identifies with her heroine. Director Grosan is a visual artist with an affinity for analogue photography, which, together with cameraman Márk Györi’s sensitive gaze, has had a huge impact on the imagery: the special use of light in the interiors and the overall brownish, autumnal palette bringing to mind old photographs imply a sweet melancholy and some nostalgia over her fleeting youth. Yet the irresistible charm of Things Worth Weeping For is mostly in the mise-en-scène, enriched with vintage objects and costumes, which creates an atmospheric environment, inviting viewers to jump right in.

Situated mostly indoors, the film opens with an exterior scene in which Maja aimlessly climbs a tree and closes with a bird's-eye-view shot in which she is rolling around in a meadow, enclosed in a transparent ball. She can see the outside world from within the ball but stays protected inside. Surrounded by the soft material, she bangs into the reality outside while jumping around and continuing to experience the world from within the bubble. Both scenes are enchanting on account of their contemplative poetics and their emotional contributions, visual embodiments of those final tastes of stolen freedom.

Things Worth Weeping For was produced by Hungarian company Laokoon Film.

more about: Things Worth Weeping For

Interview: Cristina Grosan • Director of Things Worth Weeping For

"What’s the best way to live our lives?"

The Hungarian filmmaker discusses her film, which follows a young woman whose life is put upside down after experiencing the death of an old relative

Review: Things Worth Weeping For

This eccentric dramedy portrays a female “quarter-life crisis”, where becoming an adult in an overly predictable manner feels like a hugely dull prospect

13 films across various sections will be vying for the €7,500 prize; the festival has also announced its Dealing with the Past programme 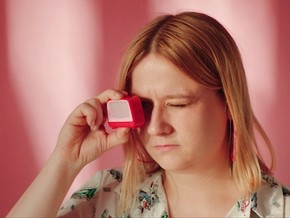