KARLOVY VARY 2021 East of the West

24/08/2021 - In his first feature, Georgian director Ioseb “Soso” Bliadze immerses the audience in the world of inaccessible mothers and emotionally stunted sons

In one of the first scenes of Otar's Death [+see also:
trailer
interview: Ioseb 'Soso' Bliadze
film profile], playing in Karlovy Vary’s East of the West competition, as we watch Keti (Nutsa Kukhianidze), clad in a skimpy top and smoking a cigarette, trying to convince a middle-aged lady to buy a face cream to help with her wrinkles and explaining that it's expensive because it's Swedish, we realise just what kind of a world the first-time Georgian director Ioseb "Soso" Bliadze is immersing us into. This is a society of inadequate, downtrodden people who struggle to make a living and whose only hopes for a better future lie with leaving their village or country.

Keti, the relatively young mother of teenage son Nika (Iva Kimeridze), is still a party animal, but the boy makes her get up with a hangover after a night of Tbilisi-style hard-drinking, so that they can go to a lake. Upon their return, Nika, who shouldn't even be driving the car, hits an old man, Otar (Marlen Egutia), right in front of his village home. Otar's grandson Oto (Archil Makalatia) runs out of the yard, yanks the boy out of the car and punches him, before his mother Tamara (Eka Chavleishvili) manages to calm the situation.

A policeman and a doctor arrive: it transpires that Otar is dead. Instead of pressing charges, Tamara demands a big payout within 24 hours. The cop is in on it, too – later, we will see his relationship to the village family is close, if not nigh-on familial.

Back in Tbilisi, Keti tries to get a loan from the bank, begs her parents for money and sells her old car, but she is still far from amassing the required amount. Nika, meanwhile, is about to attend a party with his love interest Ana (Taki Mumladze). They first meet up at Tbilisi's famous cable car, where he sexually assaults her after she finally agrees to give him a kiss. It’s a deeply unpleasant scene, with Nika clumsily but violently trying to grab hold of her... He’s hardly a seasoned predator but he’s perhaps on the path to becoming a sociopath.

As the film progresses, the attention given to the urban and rural families balances out. The latter are far from what we'd expect from rude rednecks: Tamara is a music teacher, and she loves playing her cello in the barn, among wreaths of red peppers. He, on the other hand, has a cold sexual relationship with an older woman, his mother's friend.

There are no heroes or villains here, just unhappy, unfulfilled people whose character flaws and poor decisions make their families even unhappier. Both mothers are distant and inaccessible to their sons, with one of them not being present enough and the other overly controlling. No wonder their offspring are emotionally stunted and inarticulate. But a couple of inventive visual details and contextual connections, a splash of absurdist humour, and the engaging acting offered up by Kukhianidze and Egutia, save the film from becoming an entirely bleak affair.

Dimitri Dekanosidze's camera work is rich and creative, highlighting the urban-rural divide with opposing colour schemes amidst a wide range of exteriors and interiors. Domas Strupinskas' score, mixing electronics and strings, further immerses the viewer into the film. Right up until the unforeseen and surprisingly uplifting ending, it’s hard to turn away from Bliadze’s characters, which makes the film both convincing and unpleasant - even if the screenplay sometimes feels underdeveloped.

Otar's Death is a co-production between Georgia's Maisis Peri and Artizm, Germany's Color of May and Lithuania's M-Films. Finnish firm The Yellow Affair are handling international rights.

"My film explores the phenomenon of making a profit out of an accident, a clash between city and village, and mother-son relationships in each of them"

The Georgian director discusses his first feature film, which homes in on a mother and son in the aftermath of a car accident involving the latter

Interview: Vahagn Khachatryan and Aren Malakyan • Directors of 5 Dreamers and a Horse

The filmmakers talk about some of the ideas behind their movie, their relationship with the characters and the images of Armenian society that lurk behind their portraits

In his first feature, Georgian director Ioseb “Soso” Bliadze immerses the audience in the world of inaccessible mothers and emotionally stunted sons

Creative documentary An Owl, a Garden and the Writer by Sara Dolatabadi has received the Post-production Development Award while Victim by Michal Blaško snagged the TRT Award 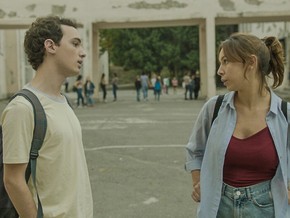 Antonio Lukich in post-production with his second feature, From Ukraine to Luxembourg

Pavel G Vesnakov in post-production with his second feature, Windless