13/09/2021 - Lucile Hadzihalilovic signs a cryptic and bewitching work, a subjugating saturnian masterpiece pushing the doors of other dimensions

"I am a traveller, a stranger in this town. I live far from here, in the shadow of a tall cathedral. We already met, that’s for sure…" In the image of this mysterious stranger, inquisitive and intrusive, encountered by the protagonist of her new film, Earwig [+see also:
trailer
interview: Lucile Hadzihalilovic
film profile], unveiled in the Platform competition of the 46th Toronto Film Festival (and which will then compete at the 69th San Sebastián Film Festival), French director Lucile Hadzihalilovic once again sucks us into her enigmatic, troubling and fascinating universes of which she has the secret.

After Innocence and Evolution [+see also:
film review
trailer
film profile] (awarded at San Sebastián in 2004 and 2015), it is this time in the English language that she offers her occult talents and unfolds all her spellbinding mastery of strange atmospheres through a goldsmith's work on the set design (bare and oppressive interiors with shutters that are always closed courtesy of Julia Irribarria), the photography (melancholic chiaroscuro with a patina by Jonathan Ricquebourg), the music (Augustin Viard and Warren Ellis) and the sound (the almost omnipresent ticking of the clock, bells ringing in the distance, the creaking of the floor, the breathing and swallowing, the crystal singing, etc.). For it is a fully protean cinematographic language that is favoured by the director's highly sensorial approach, starting with this ear opening the film in close-up.

Preserving the suspense of a cryptic plot (screenplay by Lucile Hadzihalilovic and Geoff Cox, based on the novel of the same name by Brian Catling) by never clarifying the ins and outs, the part of reality or nightmare, and only letting hints filter through two intersecting stories in slightly shifted temporalities, the filmmaker fashions a hypnotic work of the highest order.

What is it about, exactly? Everyone is free to form an opinion about the neurasthenic Albert (Paul Hilton) who takes care of Mia (Romane Hemelaers), a little girl of about ten years old, to whom he puts ice teeth every day with the help of an insane device reminiscent of a bit weighed down with small vials. A very strange activity (punctuating days interspersed with silent meals and nights when the two inhabitants take turns spying on each other) which is never explained beyond the minimalist phone calls from a "master" asking about Mia and finally telling Albert to prepare her for the outside world and a forthcoming trip. An opening to the outside world which will see the trajectory of the duo cross that of Celeste (Romola Garai) and Laurence (Alex Lawther), two characters dramatically met by Albert earlier…

Add some elliptical clues ("on the battlefield perhaps? Or before, in the orphanage? No, maybe after the war when you had a wife?") and you'll have only a very vague idea of Earwig's opaque (and still intriguing) nature, which distantly evokes David Cronenberg's Spider. But understanding the film rationally and trying to interpret it doesn't really matter because all of Lucile Hadzihalilovic's highly accomplished art is perceptive. And her aficionados will easily be bewitched by the disturbances of this dark and refined film-kaleidoscope.

Produced by the British of Anti-Worlds and the French of Petit Film, and co-produced by the Belgians of Frakas Productions, Earwig is sold by Wild Bunch International.

Lucile Hadzihalilovic signs a cryptic and bewitching work, a subjugating saturnian masterpiece pushing the doors of other dimensions

Toronto announces the line-up of its Platform competition 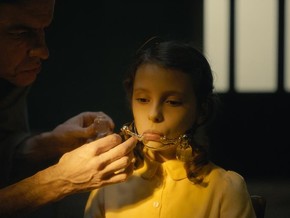