16/09/2021 - Garin Hovannisian’s political documentary may not be unbiased, but it is technically polished and emotionally charged

Back in 2019, when the feature-length version of Garin Hovannisian’s documentary I Am Not Alone [+see also:
trailer
film profile] premiered at Toronto, it was a timely and informative piece of filmmaking that shed some light on the lesser-known event of Armenia’s own “velvet revolution” a year earlier, in which the former president and then prime minister Serzh Sargsyan was ousted in a people’s non-violent revolt. Two years later, there is a new, 52-minute-long cut for television that has been screened in competition at the AJB DOC Film Festival.

The protagonist of the film, and the revolution itself, is Nikol Pashinyan, a former journalist and an opposition politician with little to no support from the voters. After the trauma of the failed revolution in 2008, when peaceful protesters were met with violence by the police, resulting in the deaths of ten people, the decade of corruption facilitated by Sargsyan and the dubious political act that let him switch the presidential chair for the prime minister’s one (transferring power in the process), Pashinyan, in desperation, decided to start a march in the city of Gyumri and lead it through Vanadzor to the capital, Yerevan, to prevent the parliament from electing Sargsyan as the prime minister. The march gained some momentum via social media, but the number of people that gathered was not big enough to prevent the procedure. Through some risky manoeuvres, Pashinyan managed to motivate people to pile more and more pressure on those in power by means of civil disobedience. The upshot is that Pashinyan became the new prime minister, his associates the ministers, and they started to fight the corruption of the former régime.

Apart from Pashinyan, whose efforts were documented on social media channels, director Hovannisian finds his interlocutors in the guise of Pashinyan’s wife, Anna Hakobyan, also a journalist by trade, and his adversaries, chief of police Valeriy Osipyan and Sargsyan himself, whose interest in chess serves as the ironic punchline of the film, as he is outsmarted in this game of political tactics. One of the movie’s producers and its music composer, Serj Tankian (of System of a Down fame), also appears in front of the camera to offer some commentary. The filmmaker’s attitude is clear: quite politically biased, but nevertheless not unethical.

In its TV format, I Am Not Alone is even more compact and accessible for the viewer than its feature-length version. The abundance of the material filmed on the ground, at the very site of the events, both in professional and more amateur formats, invites comparisons to Maidan Square-themed works like Sergei Loznitsa’s Maidan [+see also:
trailer
film profile] (2014) and Evgeny Afineevsky’s Winter on Fire [+see also:
film review
trailer
film profile] (2015), which do not necessarily end in favour of Hovannisian’s documentary, but the result is actually decent, nevertheless. The cinematography by Vahe Terteryan is full of attractive “money shots”, and the editing by Barry Poltermann blends the social-media video clips in with them in a smooth fashion, while Tankian’s score pumps up both the tension and the emotion. I Am Not Alone (the title is taken from the protesters’ song composed during the march) is still an easy-to-watch and easily comprehensible documentary on a political topic.

more about: I Am Not Alone

Garin Hovannisian’s political documentary may not be unbiased, but it is technically polished and emotionally charged

The Al Jazeera Balkans Documentary Film Festival, dedicated to TV documentaries, will take place from 10-14 September both on location in Sarajevo and online

Pietro Marcello’s film was awarded by a jury comprising Athina Rachel Tsangari, Carlo Chatrian and Jessica Kiang; other gongs went to Proxima and How to Build a Girl

Review: Stories from the Sea

Review: I Am Zlatan 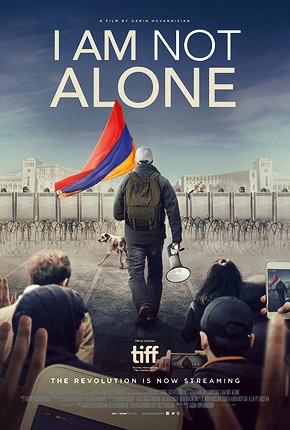 At Cartoon Springboard, Julien Papelier and Lila Hannou explore the new frontiers of animation and publishing

Produce – Co-Produce... – 25/10/2021
The Slovenian Film Centre publishes a study on the accessibility and competitiveness of European audiovisual works from small language environments
The research provided a number of key findings in terms of public funding, incentives and film policies

The Andalusian director has adapted Cristina Campos’ book of the same name for the big screen, and the result has been world-premiered at the 66th Valladolid International Film Festival

Christophe Hermans • Director of The Hive

We met with the Belgian filmmaker known for his documentaries, who presented his first feature-length fiction film: a thoroughly female huis clos