Then the steamers stop – a common problem in the dappled, sunlit factory bathed in a constant grey-blue hue, and no one seems too worried. But all that changes when the bosses start to get hot under the collar. It's a big day for Kadir (Mucahit Kocak), the clean-shaven, English-speaking manager of the factory, which is owned by his dad. In the evening, the charming young man is going to meet his girlfriend Esma's (Burcu Gölgedar) parents for the first time. It's a relationship that's been going on for some time, even though Kadir still hasn't told his own father, Ibrahim, that he wants to get married or that he smokes. The couple's modern outlook on love is in stark contrast with the traditional position they've taken at home.

The young lovers’ conversation is the first indication that work and family might get in the way of Kadir's best-laid plans. The tension between satisfying his family's wishes and living out his own life is about to spin out of control like a broken washing machine. The factory has cash-flow problems and must deliver a shipment immediately in order to get paid by the next week, or the family will suffer financial ruin. Then, midway through a video call with their Romanian clients, a worker is injured on the factory floor, suffering severe burns.

The calculating family lawyer (Erdem Senocak) counsels the father (Ünal Silver) and his two sons to try to get the injured worker's wife (Nezaket Erden) to sign a waiver, as there is potential for them to serve jail time if her husband goes into a coma or dies. One way to avoid prison is for one of the three owners to take the fall and leave the country.

The influence of Russia's great authors Chekhov and Dostoevsky on Turkish cinema has been widely known for many years through the Cannes Palme d'Or-winning work of Nuri Bilge Ceylan. Like them, Nacar's film is about a man's life running out of control. Kadir’s desire to help his family means that he doesn't acknowledge his own willingness to do things that are morally wrong, or how much he acts out of self-interest. His failure to take the reins of his own life is his road to ruin.

This is a strong debut from Nacar, whose interest lies in creating moral dilemmas and showing how those with power will do anything to retain their position, no matter the cost. The amount of dialogue needed to work through some of these situations makes the film feel static at times, even when the director tries to give a sense of motion with small camera movements. A prime example of this is when what should be a pivotal scene, showing Kadir revealing all to Esma, is taken up by exposition before finally elevating the stakes. But as a study on how moral incertitude leads to demise, it's well oiled and at least works better than the factory steamer.

more about: Between Two Dawns

Cineuropa caught up with the Turkish director after the world premiere of his debut film, which last year won a couple of work-in-progress prizes at this very festival

Turin gets set to revel in full-capacity film screenings

The Torino Film Festival will unspool between 26 November and 4 December, with cinemas at full capacity, spotlighting 181 films hailing from around the world

The 22nd edition of the event will unspool between 5 and 14 November, with over 100 films on the agenda and a myriad of artists in attendance

The works by Juan Andrés Arango and Eduardo Crespo stood out among the Latin American winners, while those by Francisco Marise and Ion Borș excelled among the European efforts 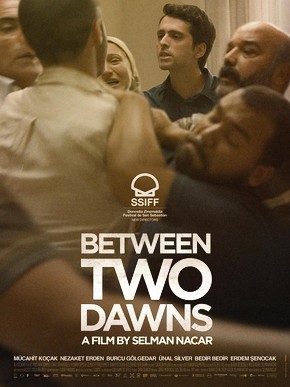