Presented in the Zurich Film Festival’s Special Screenings section, Les Nouvelles Èves is a collective documentary directed by Camille Budin, Annie Gisler, Jela Hasler, Thaïs Odermatt, Wendy Pillonel and Anna Thommen, and produced by Judith Lichtneckert and Liliane Ott. By way of their keen and lucid approach, the six Swiss or Swiss-by-adoption women directors urge the audience to reflect upon the concept of "femininity" as a social construct, delivering a battle cry against a patriarchy which is doing all it can to cling onto its own decadent privileges.

One year on from the National Women’s Strike in Switzerland, the equality debate is still raging on. By way of Les Nouvelles Èves, the directors examine the daily lives of six protagonists hailing from different professional and family backgrounds in an attempt to understand what it means, today, to be labelled as “women”. Thanks to an interesting coming and going between one portrait and the next, the directors manage to establish a virtual connection between these six “everyday heroines”, as they describe them, six protagonists who consciously battle against gender stereotypes and against a grotesque script which patriarchal society would like them to act out without question.

How do you escape from a prison which seeks to standardise “women” by turning them into docile and submissive beings? How can they emerge as individuals within a society which views gender binarism as the grotesque, obvious choice? With tenderness and empathy, Les Nouvelles Èves follows these six “women” who have decided to rebel against the norms associated with their gender, six individuals who intend to express their own identity with courage, thinking of themselves rather than the expectations of a society which has labelled them from birth.

The six directors leave it to their protagonists to speak, trying not to interrupt with comments which might weaken the latter’s testimonies. Thanks to the lucid and benevolent light they cast on their “everyday heroines”, the film becomes a stage, of sorts, which welcomes dissident voices. Words become free, providing those who are too often deprived of them with the opportunity to express an individuality otherwise suffocated by a patriarchy which tries to silence anyone who refuses to follow its rules. The road might still be long, but Les Nouvelles Èves shows us that a reality beyond gender stereotypes is nonetheless possible, necessary, even. Living our own lives without worrying about other people’s opinions becomes a militant act, a first, necessary step towards recognising an identity no longer suffocated by stereotypes.

Despite the sincerity of this highly necessary film which bravely portrays the daily lives of six “new Eves” wrestling with a society which wants them all to be the same, Les nouvelles Éves might have benefited from greater emphasis on the socially constructed nature of gender binarism. It would have been interesting to move beyond the sacred and necessary debate on equality between “men” and “women” to show just how wide and varied – and not exclusively binary - the spectrum of possibilities and battlegrounds relating to gender identity truly is. The story of a transwoman, for example, would have allowed the film to foreground the harmful yet sadly trivialised stereotypes associated with the notion of innate and natural “femininity”.

The winning film of the 2021 Migros-Kulturprozent CH-Dokfilmwettbewerb competition, Les nouvelles Éves is produced by Zurich’s Emilia Productions in co-production with SRG SSR. The former are also entrusted with international sales.

Review: Too Close to the Sun 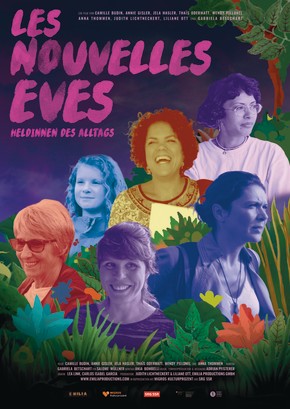