15/10/2021 - Shirin Neshat and Shoja Azari throw Sheila Vand, Matt Dillon and William Moseley into a borderline surrealist satire on identity and the excesses of the United States

"Have you ever seen a nightingale fly in the dark night? It only flies at night if its nest has been destroyed or if it no longer knows how to find it. It is then that it becomes prey for the owl." Ranking high among the last scripts penned by the dearly departed Jean-Claude Carrière is that of Land of Dreams [+see also:
trailer
film profile], a work in which the satirical and surrealist inclinations of Luis Buñuel’s former writing accomplice find a very welcoming territory of expression, nestled in a “Lynchian” American atmosphere created by the Iranian filmmaking duo Shirin Neshat - Shoja Azari (though they live in America). A film both playful and serious, detached and engaged, which was unveiled last month in the Orizzonti Extra programme of the Venice Film Festival (where Shirin Neshat had won the Best Director award in 2009 with her feature debut Women without Men [+see also:
film review
trailer
film profile] and where she presented Looking for Oum Kulthum [+see also:
film review
trailer
interview: Shirin Neshat
film profile] in Giornate degli Autori in 2017) and screened yesterday in Competition at the 12th La Roche-sur-Yon International Film Festival.

“We collect people’s dreams.” Simin (Sheila Vand, seen recently in the series Snowpiercer) works for a government census agency, but she goes door-to-door with a very unusual goal: to record her interviewees’ account of their most recent dream. What for? Even she doesn’t know, and is happy to follow orders and transfer the audio data into the server of her employer’s ultra-modern building, all the while giving, if necessary, the only official explanation at her disposal: “it’s for your security.”

The pretty and conscientious Simin, who leads a practically monastic existence, is also secretly fascinated by these dream memories, to the point of re-enacting them, disguised and transformed (with wigs, makeup and costumes) at home in the evening, like an actress, and of sharing these little videos on social networks. But she is also someone who was born in Shiraz and has been exiled from Iran for a long time, and someone whose painful memories will be cathartically reawakened by an even more special mission in her job as a dream collector. All of this under the gaze of the two very different men who follow her almost everywhere: the cynical Alan (Matt Dillon), tasked with protecting her, and the poet Mark (William Moseley) who’s in love with her.

Never concealing its political intentions (in particular through an anecdote told in a bar: a young immigrant is the only student in his class to know the authors of famous quotes from American history, such as "Give me liberty, or give me death!" and “government of the people, by the people, for the people”) and the freedom-destroying excesses of surveillance technology, Land of Dreams walks on the very thin frontier between dream and reality, analysing like a photographer the oddities and the essence of various lives. A willful distance amplified by a very slick mise-en-scène that generates a strange and somewhat floating atmosphere, since “in the world of dreams there are no rules” and it is pointless to try and control it, even though it harbours all fearful and healing powers.

more about: Land of Dreams

Shirin Neshat and Shoja Azari throw Sheila Vand, Matt Dillon and William Moseley into a borderline surrealist satire on identity and the excesses of the United States

La Roche-sur-Yon welcomes the many faces of contemporary cinema

The 12th edition of the French festival will unfold from 11 to 17 October with a very rich and diverse programme of more than 100 films, including nine in international competition

Alberto Barbera presents the 19 films selected, reminding us that “many authors passed through the Orizzonti section before arriving in the festival’s Competition” 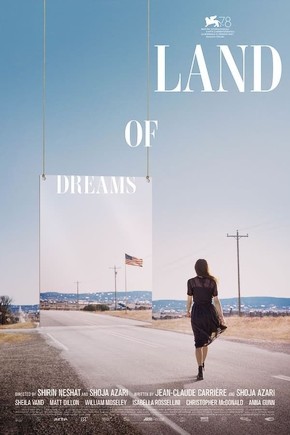