Passing [+see also:
trailer
film profile] begins not with an opening shot, but with an introductory soundscape. Whether it’s an optical illusion or the camera’s sensor being deliberately over-exposed, the frame is bathed in white, but with snippets of banal chitchat densely layered in the audio mix. As the succeeding image fades in, a slanting New York pavement is gradually revealed, but the significance of the sight-free opening is not lost: people talk, and social reputations can depend on a single syllable. This unsteady, gossipy atmosphere is the world of actress Rebecca Hall’s directorial debut, focusing on the friendship between two light-skinned black women, one of whom decides to “pass” as white. The film premiered at Sundance, before relaunching again on the autumn festival circuit, showing at the BFI London Film Festival last week.

This relationship between word and image signals Passing’s limitations as a piece of cinema, timely and fascinating though its subject matter may be. Hall’s direction imparts a lacquered good taste: lustrous, high-contrast, black-and-white cinematography, dramatic pacing like walking in fine shoes, and a period-appropriate jazz score by electronic musician Devonté Hynes, aka Blood Orange. Much of the dialogue between the characters is lifted from the originating novella by Nella Larsen, but critically, Hall can’t find a strong substitution for the lead character Irene’s (played here by Tessa Thompson) inner monologue in the text. Reading Passing is like being immersed in an anxiety attack, with Irene’s emotional dilemmas haunting and palpable; the film is typical of literary adaptations that one regularly sees from British directors, where canonical texts are brought to the screen with a respectful, cautious stiffness.

The cast inhabit their roles with commitment, of course, with special plaudits reserved for Ruth Negga (commonly regarded as one of Ireland’s finest working actors) in her role as Clare, who has managed to transgress the racial divide of 1920s New York and lives in genteel, white society, together with an openly racist husband (Alexander Skarsgård), who has no other awareness of her background. Once she recognises Irene – a family friend from her youth back in Chicago – in a posh tea hall, Clare develops a longing to return to her heritage, cheerily and maybe recklessly crossing between the two worlds. Irene is secure in her identity (although she wears her wide-brimmed hat down when in white social spaces) and her marriage to a doctor from her own racial background (André Holland), but Clare’s re-emergence deeply unsettles something in her; to Hall’s subtle credit, her adaptation implies that it shakes her out of an unquestioning complacency towards her life and familial duties.

Otherwise, Thompson is saddled with overplaying the same emotional note of reserve, whilst Negga enlivens the screen, a hint of a Tennessee Williams heroine in her skipping cadences and tragic arc. The Passing novella has a thriller element to it, as we see Irene contriving various schemes to remove her unwelcome ex-friend from her life; the film, instead, lopes dolefully towards a foreseen conclusion. But even in this flawed cinematic version, Passing does gain something from being seen on screen: a reminder of that transitional era in American life – which filmmakers now seem more empowered to depict as it actually was – with advances in racial equality at risk from armies of backlash encroaching on all sides. 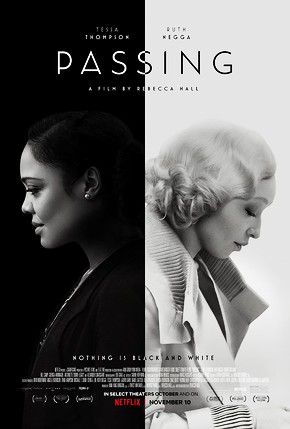 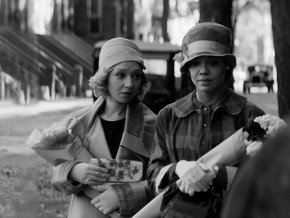