08/11/2021 - Matevž Luzar takes his viewers on an overlong bus ride, motion sickness be damned – but at least the drinks keep on coming

Matevž Luzar’s Orchestra, a tiny, black-and-white proposition that made it into FilmFestival Cottbus’s Feature Film Competition (where it celebrated its world premiere), finds some humour in its characters’ boring routines. As a brass band from Slovenia invited over to Austria, they play, sure, but before that, they gossip and drink – so much so that it’s a wonder anyone can actually perform later on. Except for some new encounters, and a whole subplot involving those who stayed at home and – shock – decided to drink on their own, that’s pretty much all that happens. You get on a bus, start drinking, get to the hotel and continue, merrily yelling “Spritzer!” when someone attempts to take your photo.

Their interactions, ranging from drunken monologues to hungover grunts, are quite convincing. Predictably, they are all struggling, worrying that one thing or another will lead them into debt or cost them their job – be it excessive drinking, a daughter’s wedding looming on the horizon, or even a scratched bus, as in the case of a rookie driver, a new father who always looks half-asleep. It would be more entertaining if Luzar’s film were shorter, however, as even with the likeable protagonists, ultimately it just drags, lacking the necessary story to fill up the time.

The director reportedly used to tour with the very same band, and somehow made it out alive – which is clearly a feat in itself. Here, he shows what he knows, and funnily enough, it’s the older musicians who misbehave, with a few younger kids visibly unimpressed by all the drinking and yelling. But everyone needs to leave the safe cocoon of their bus every once in a while, if only to meet Austrian locals who sometimes provide them with housing and are in for a rude awakening. “How come he is not bored, hanging up there?” enquires one orchestra member, staring at Jesus on the cross in one of the religious households that was silly enough to take them in. But a teased “clash of two cultures” never really happens, mostly because the team is too busy getting hammered, only later trying to apologise for the mess.

There is a whole story here that would have worked better as a separate, short movie, as a bunch of ladies decide to take advantage of their husbands’ absence and partayyy. It’s a real night of abandon, one they probably can’t afford very often, and entertaining to watch. But it doesn’t necessarily fit the whole narrative, whose heart always stays on that damn bus, continuing on its journey with “the worst passengers ever”, convinced that whatever happens, a spritzer or two will always ease the pain. In their case, it really does – at least until the morning comes around or a cop shows up, holding a breathalyser.

In terms of the number of awards won, Matevž Luzar’s movie has ended up tying with Riders and The Happiest Man in the World, which got three Vesnas each

Matevž Luzar takes his viewers on an overlong bus ride, motion sickness be damned – but at least the drinks keep on coming 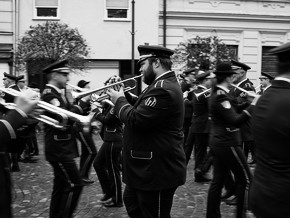