BLACK NIGHTS 2021 Rebels with a Cause

Romy Trajman in My Parents' Divorce

My Parents' Divorce [+see also:
trailer
film profile], the first documentary feature by Romy Trajman, was screened in an international premiere within the Rebels with a Cause section of Tallin’s Black Nights Festival. Co-penned by Anaïs Straumann-Levy, it’s an intimate and surprising film in the form of a filmed diary come family study on the frontier of things left unsaid, which transcends genres. Why were her parents unable to form a family? What are their flaws? Where do their silences come from? And how do you pull yourself apart in order to better rebuild?

Romy Trajman is bursting onto the scene with this fascinating first film after an unusual career path. An actress, author, director and singer, she first turned heads at 14 years of age with a music video which created quite a buzz online. She directed a first short film, then started a course at a musical theatre school before joining the Luc Besson Film School. She later wrote and directed a web-series with her mother, before directing this first feature, as well as co-writing its music.

My Parents' Divorce is actually the director’s story. 21-year-old Romy enjoys a very close bond with her mother, with whom she shares almost everything, including her job and her passion. They’ve created a production company, through which they direct various musical and audiovisual projects, which mostly revolve around their speciality: single parent families. Her love and loyalty are unfailing. Or are they?

Because Romy, who’s in the throes of an existential crisis, is asking herself a few questions. She hasn’t seen her father or his family since her parents’ divorce 15 years ago, and in her father’s eyes she’s still Sarah, the little girl with a forename which she’s since left behind. But how can she rebuild her identity without reconciling these two identities, and without understanding how and why her parents are no longer a family unit? For, whilst she knows her mother’s side of events, she’s missing a vital part: her father’s story.

As a result, she decides to go to see him in Brussels, accompanied by a cameraman friend, in order to enquire about the separation and break the infernal circle of silence, pain, suffering, violence and trauma, and to understand how the reasons behind her parents’ divorce - notably linked to her father’s bipolar - go back quite a way, deeply rooted in a family history marked by the Holocaust and mental illness. In order to find her own path, Romy uses her voice and looks back at her story through song. And in order to better understand her parents, she makes them the main characters of her investigative film, offering them new depth and diving headlong into their complexity.

My Parents' Divorce breaks codes and takes the path of a family study documentary, only to blow it up with colourful pop music videos, adopting her parents’ whimsical side, embracing their taste for craziness and breaking free from normality. It’s a film which captures the zeitgeist, at a time when speech is becoming freer and when silence feels like the ultimate form of violence; one which stifles and endorses pain, preventing us from moving forwards. In this case, the film is an exorcism of sorts, which lifts the veil on the hidden depths of a family history cut through by stories big and small; which portrays its own resolution - the final acceptance of the irreconcilable, of the fact that this couple can no longer love one another - and which chooses to joyfully celebrate this separation which is, at last, being explored.

more about: My Parents' Divorce 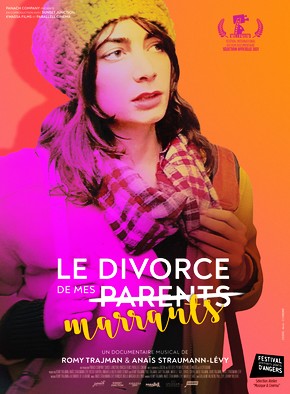