There is some unquestionable pleasure coming from not having the faintest idea where a film is going and Francisca Alegría – already awarded at Sundance for her short And the Whole Sky Fit in the Dead Cow’s Eye – seems eager enough to provide it. Starting with close-ups of suffering fish singing a sad song (the latest victims of the ongoing poisoning of a local river in Chile) and a biker chick emerging from its polluted waters where she has been stuck for decades, The Cow Who Sang a Song into the Future [+see also:
trailer
film profile] quickly establishes its own rules. It’s odd, weirdly melancholic and sometimes it doesn’t make one iota of sense.

It's a testament to Alegría that the film remains a mystery until the very end – explaining too much would probably break the spell. The long-deceased Magdalena (Mia Maestro) comes back to her grown-up children and a husband (Alfredo Castro) who – it is implied here – has done her wrong in the past, but she is not out for blood. An ambiguous, mute ghost, she appears curious, eager to take in experiences she was deprived of for so long. It’s hard to say if Magdalena returns because her family will soon face some significant changes or because something bigger is looming on the horizon, but there she is – a missing link these long-suffering people clearly needed.

Her arrival is just one of many increasingly strange signs. If the apocalypse is finally coming, the animals, also the ones on the family’s dairy farm, sense it first. They are only too eager to leave their horrific existence behind – a bit like the dolphins in the Hitchhiker’s Guide to the Galaxy, although here they hum their last message. It would make for an interesting double bill with Andrea Arnold’s Cow [+see also:
film review
trailer
film profile], which also focused on the constant exploitation of their bodies and their solitude.

Alegría embraces what magical realism has to offer and the ordinary collides with the unexplainable all the time: desperate locals protest environmental decline, wounds heal leaving no trace, a middle-aged woman (Leonor Varela) misses the mom she never really got to meet. It’s a shame that by the end the film becomes increasingly meandering, with some of the final scenes forced together as if by pure accident and way too many cow close-ups. While she grants them some sort of revelation or even closure, her protagonists are not given that much time to develop, either. Perhaps I have dreamed it all, but despite everything shown here there is some cautious optimism that seems to imply that – just like in Adam McKay’s Don’t Look Up – when the going gets tough and the authorities insist on ignoring the signs, you can still try to come closer to your loved ones, at least some of them. Even the ones that don’t talk – or live – anymore. Considering where we are all heading, there might not be that much to say anyway.

The Cow Who Sang a Song into the Future was produced by Tom Dercourt and Alejandra García, co-produced by Shrihari Sathe, Michael Weber, Viola Fügen, Andrés Wood and Bruno Bettati. A Cinéma Defacto and Andrés Wood Producciones production, made in co-production with Match Factory Productions, Jirafa films, in association with Dialectic, Bord Cadre Films, Sovereign Films and Whitewater Films. Sales are handled by Match Factory.

more about: The Cow Who Sang a Song Into the Future

The first feature by Francisca Alegría, produced by France, Chile and Germany, has been selected in the World Cinema Dramatic Competition at the Sundance Film Festival

There’s no talk of online or hybrid formats this year; instead, close to one hundred works of each and every genre will be banging at the Luxembourg capital’s gates between 3 and 13 March

Carlota Martínez Pereda dabbles in Carrie mythos, delivering the kind of film that will put you off Spanish holidays for life 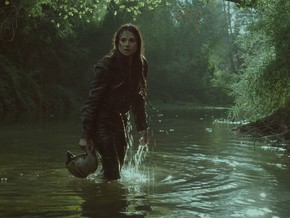