Growing up with a filmmaker as a parent probably entitles you to birthday-party and Christmas home videos that are shot like Bergman films, and are likely well crafted enough to be accepted at festivals. But with Penelope My Love [+see also:
interview: Claire Doyon
film profile], director Claire Doyon’s natural propensity to film has brought her a unique study of maternal love, and of coping with the early years of illness and disability. She began capturing her own daughter Pénélope on Super 8 and digital video for two decades as she grew up, and has whittled the footage down into this alternately revealing and frustrating observational portrait that sometimes casts greater insight on the mother’s travails than those of her troubled offspring. After world-premiering at FIDMarseille, where Doyon was previously awarded for a smaller film on Pénélope from 2012, it washed up in the Harbour section of this year’s virtual IFFR.

There are two key compositional elements to Penelope My Love: self-shot actuality footage, captured from a high angle, of the energetic Pénélope (or “Péno”, as her mum often calls her), and Doyon’s own intermittent voice-over. It must have been cathartic to assemble this near-time-lapse study of her daughter’s struggles – the director’s articulate words, running in tandem with the footage, conjure real pathos. In her words: “Up to age two, she developed like other kids.” From then on, Doyon conveys her agony and confusion as her first daughter starts diverging from how “other kids” are supposed to behave: communication delays, hyperactivity and turbulent sleep send the parents flailing and seeking treatment, as well as a sense of respite.

Péno is given an initial diagnosis of severe autism, along with the lesser-known Rett syndrome – a rare genetic disorder that affects brain development, causing a progressive loss of motor skills and speech. Further specialists are consulted, sometimes from the more alternative realm of medicine and healing, and her parents frame it as a race against time to unearth a sense of functionality and normality within her, located somewhere beneath the troubling symptoms. This is obviously more justifiable if trying to address Rett syndrome on its own: although there’s a slippage and overlap between the prognosis for the two conditions, claims that Doyon can “fix” or, in her words, “save” her daughter cause discomfort in this age of autistic pride and its related concept of neurodiversity.

Audiences are likely to feel great empathy for Péno’s alienation in the world, but perhaps less for her mother’s point of view – although her narration has also arguably been designed to provoke, and to confessionally vent her flawed way of seeing. Péno is always framed in relation to her age group – “The girl on [floor] 7 who stops breathing”, compared to the child on “[floor] 8 who plays guitar” – and her unaccommodating environment, shunned by the sales clerk who “[doesn’t] sell shoes to retards”. Far later than the audience, who will likely come to this film very familiar with the subject matter, Doyon seems to only belatedly realise that Péno will have to find meaning in and bed into the world her own way and foster, in the filmmaker’s words, “a singular mode of perception”. Although made with the best intentions, a more enlightening version of the story might simply be about “being” and living, as opposed to ridding and curing.

Penelope My Love is a French production staged by Tamara Films, COfilms and Micro Climat.

more about: Penelope My Love

“The camera felt like a weapon as well as a shield”

Mirko Gianinni, Jehnny Beth and Bastien Bouillon lead the cast of the director’s first feature film, produced by Tamara Films and set to be unveiled in the Cineasti del Presente section

The 20th FIFDH announces its programme 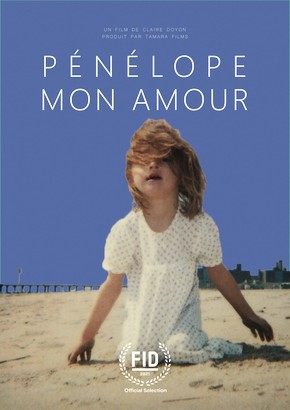