Bogdan Dumitrache in Man and Dog

Exactly when one might think that it was high time Romanian cinema put a dam on its deluge of minimalist dramas centering on middle-aged men in crisis, here comes Romanian director Ştefan Constantinescu’s  engaging and relevant feature debut Man and Dog [+see also:
interview: Ştefan Constantinescu
film profile], which recently had its world premiere at the Göteborg Film Festival. The film focuses on a 40-something man who unexpectedly comes back from Sweden to his hometown, Constanţa, after becoming suspicious his wife is having an affair.

Depending on one’s view on toxic masculinity, Doru, the protagonist played by Bogdan Dumitrache, may not be likeable at all. As he receives an anonymous text message warning him that his wife, Nicoleta (Ofelia Popii), is cheating on him, he returns from Sweden to Romania, exactly when the pandemic throws the entire globe into chaos. What we see is a man in deep crisis, so desperately searching for certainty that he is willing to pry and even sacrifice old relationships in order to get his answers.

Of course, Doru’s actions may not endear him to the audience (although he is almost always accompanied by Amza, probably the cutest dog ever seen in a Romanian film), but the screenplay written by Andrei Epure, Constantinescu and Jörgen Andersson (who is also one of the film’s co-producers) adds layer after layer on the narrative and somehow Man and Dog becomes a story much larger than that of a jealous man.

Constantinescu, who as his protagonist spends time in both Romania and Sweden, gives a voice to all those Romanian men and women who were pushed by adversity to leave their families and work abroad, more often than not in less than ideal conditions. Doru sees himself as a provider, a man who went through a lot in order to be there for his family, at least financially if not personally. He feels entitled to demand something back, i.e. certainty. Certainty that he has done right by his family, that his sacrifice was not in vain. And when his suspicions about Nicoleta’s fidelity put this certainty under the microscope, he goes crazy.

Man and Dog explores very convincingly a certain mentality, a type of alienation and the unescapable questions a mid-life crisis hurtles upon everybody. In Doru’s case, these questions go deep into the biggest decisions in his life, marrying Nicoleta and uprooting his entire existence to go work in Sweden. And above these questions, there is a bigger one: what if everything was in vain? What if he was not a provider, but a liability?

After a decade of playing men whose lives are shattered by an event outside their power (most notably in Constantin Popescu’s Pororoca [+see also:
film review
trailer
interview: Constantin Popescu
film profile], who won him the Silver Seashell at San Sebastian in 2017), Dumitrache has honed his craft to perfection to play Doru, a man whose bottled up desperation will soon explode, and, when the dust settles, will become a symbol for millions of Eastern Europeans seen as a cheap labour force in their adoptive country and as mere visitors, as those who left, in their native country. It is here where Doru becomes endearing and wins our hearts.

Man and Dog was produced by microFILM (Romania), and co-produced by Klas Film (Bulgaria), Doppelganger (Sweden) and Pandora Filmproduktion (Germany).

more about: Man and Dog

“Romania and Sweden are on two different planets altogether”

The Romanian-born, Swedish-based director explains the forces at work behind his feature debut, which world-premiered at Göteborg

All of the other awards at this year’s edition went to European productions, such as Beautiful Beings, Feature Film About Life and The Night Belongs to Lovers

Nine of the titles are feature debuts, several of which have already been screened and acclaimed at international festivals

“If we look too far into the distance, we risk falling into the hole at our feet”

60 titles have received backing, including six features and shorts in which Romania is a minority co-production country

The teams behind the 29 selected projects will meet with film professionals over the course of four days, from 15-18 March 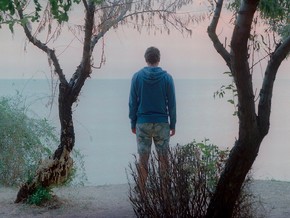