Review: For the Many

13/02/2022 - BERLINALE 2022: Constantin Wulff's empathic documentary on the Chamber of Labour in Austria showcases the accomplishments of the worker’s movement in the face of exploitations in the labour market

For the Austrian people, it might be the most ordinary institution on the periphery of their professional careers. For others, it’s a perfect example of the pillars of the worker’s movement that has shaped Vienna and its welfare state for the past 100 years. Premiering in the Forum section of Berlinale, Constantin Wulff's documentary For the Many - The Vienna Chamber of Labour [+see also:
trailer
film profile] deals with the daily procedures of the Arbeiterkammer Wien (AK), the Chamber of Labour. The last bastion fighting against exploitation in the workplace.

Using an observational, non-interfering approach to the dealings of its employees, Wulff opens up an emotional, often disturbing view into the challenges that the workers are confronted with on a daily basis. One does not need a trained eye to realise that most of the AK’s clients are workers of immigrant background. Many come with translators or a family member handling their business. Most workers are, in COVID-19 speak, so-called “essential workers,” working in the building sector, gastronomy, care units, cashiers or delivery services. The same issues pop up on repeat: salaries that aren’t paid, employees fired over an injury, lack of formal contracts, or blackmail used to downgrade a work contract.

Even people who do not live under precarious work conditions can empathise or relate to many of these issues. The exploitative culture of the job sector comes in so many shapes and sizes that much of what these clients recount is bound to reflect, to some degree, the experience of the viewer. Wulff allows his audience to feel with these people. Their desperation, their anger is written on their faces, and the camera never flinches. One woman cries in despair, fearing that her job might cease if she doesn’t sign a new detrimental contract. Yet Wulff never exploits these moments. These people are the heroes, the ones that made the step of asking for help and standing up for their legal rights.

This issue — that the workforce too infrequently asks for help — is a recurring theme in the documentary, an appeal to its audience not to make the same mistake. As shown by a press conference from the Viennese AK about a scandal where a company rebranded Chinese masks as ‘Made in Austria,’ “If those people had been paid, they would have never come to us.” Ergo, the scandal would never have been discovered.

COVID-19 itself offers the perfect coincidental foil for Wulff to further his argument. The documentary sets out in early 2020 to tell the story of 100 years of AK, celebrating a century of ensuring worker’s rights. Then suddenly, everyone has to stay home. A refocus and rebranding is only the beginning. Now, the AK has to prove that they really are by workers’ side in these moments of greatest despair and need. With massive layoffs, short-time work and missing full-time incomes, the chamber is faced with even more pressing challenges than in all its prior decades.

Wulff has proven his sensitive approach to dealing with life’s hardships in his previous films. In 2015’s Wie die Anderen [+see also:
film review
trailer
film profile], he observed the staff at a child and youth psychiatric ward. Finding a special language between never stigmatising his objects of interest, and not shying away from showcasing the harsh reality, is what makes his documentaries so eloquent. At the same time, he highlights the accomplishment of the welfare state, without ever applying a preachy undertone or bluntly attacking those undermining it.

For the Many is an emotional glimpse into the reality of exploitative, unregulated, neo-liberal work standards — and the danger of taking these conditions for granted. “You’re asking the wrong questions,” a spokesperson reminds a journalist at a COVID-19 press conference concerning lockdowns. “Why are western societies so ill-equipped to deal with someone pressing the pause button?” Why is it that, lacking savings, the most unfortunate need the economic motor to always keep running? For the Many does not provide an answer to this question, but it does highlight its manifold symptoms.

For the Many was produced by Johannes Rosenberger, Johannes Holzhausen and Constantin Wulff and funded by Navigator Film. Worldwide sales are handled by Cercamon.

more about: For the Many - The Vienna Chamber of Labour

Review: For the Many

BERLINALE 2022: Constantin Wulff's empathic documentary on the Chamber of Labour in Austria showcases the accomplishments of the worker’s movement in the face of exploitations in the labour market

Twenty-seven films have been chosen for the main programme of the section, including Anka and Wilhelm Sasnal’s We Haven’t Lost Our Way, and Rewind and Play by Alain Gomis 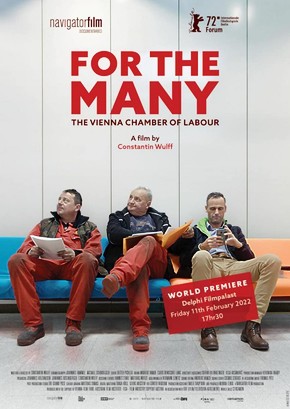 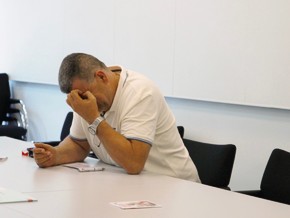