Review: Let the Wrong One In

07/03/2022 - Conor McMahon’s new feature is a wonderfully silly film, rich in slapstick and sarcasm, and with a pinch of cringe comedy

Anthony Head and Karl Rice in Let the Wrong One In

Let the Wrong One In, Conor McMahon’s new directorial effort, is probably one of the most idiotic cinematic adventures released over the last few years. But don’t get us wrong: this should be taken as a compliment. The movie, taking part in this year’s Virgin Media Dublin International Film Festival (23 February-6 March), is a wonderfully silly tale, rich in slapstick and sarcasm, and with a pinch of cringe comedy.

The film opens in Transylvania, where an Irish middle-aged bride-to-be (played by Mary Murray) and her hen-party friends are being chased by a pub owner after leaving without paying the bill. At one point, the woman is left alone and ends up in a dark corner, where she is approached by a stranger. The man comes close and bites her neck. Yes, it’s another story about vampires, but after this point, the action then takes place entirely in Northside, Dublin, where Matt (Karl Rice), a kind-hearted young supermarket employee, lives with his mother (Hilda Fay). After she leaves, Deco, Matt’s older brother (Eoin Duffy), shows up, but he is visibly distraught and tries to avoid the sunlight at all costs. It doesn’t take long for them both to realise that Deco has turned into a vampire and that he became infected after being seduced by the woman we saw in the first scene. Most of the plot develops around the dilemmas that Deco and Matt must face, as the former is torn between his thirst for blood and avoiding the prospect of spreading the infection further, while the latter must choose between saving his family – and whoever they meet along the way – and sparing his brother.

Everything in this picture is over the top – the actors’ performances, the gory practical effects and the characters’ gullibility – but it’s a coherent choice, and McMahon skilfully sets up the tone of his narrative right from the very first frames. Even the score and the songs featured – taking in Franz Ferdinand’s “Take Me Out” and Dana’s local 1970s hit “All Kinds of Everything” – reflect his willingness to tell a crazy story, where anything is possible.

“Does Let the Wrong One In bring anything new to the table?” one may wonder. Certainly not, but there are a few elements here that still make it a fresh piece of work, and it may easily satisfy the appetites of lovers of the comedy-horror genre and enthusiasts of flicks such as Edgar Wright’s Shaun of the Dead or the Scream saga. The “Irishness” of its characters, the weird manner in which it tackles the mother-son relationship and sibling rivalry, the presence of Buffy the Vampire Slayer icon Anthony Head in the role of Henry (an English taxi driver with a sideline in vampire hunting) and an incredibly demented ending make it at least worth considering for a pleasant watch with friends.

Let the Wrong One In is an Irish production staged by Workshed Films and Tailored Films. MPI Media Group is in charge of its world sales.

more about: Let the Wrong One In

Review: Let the Wrong One In

Conor McMahon’s new feature is a wonderfully silly film, rich in slapstick and sarcasm, and with a pinch of cringe comedy

On 27 October, science fiction will be making its return to the city, online and in person, in the form of over 40 world, international and national premieres, and a focus dedicated to Switzerland

Screen Ireland announces the recipients of its latest slate of funding

The Irish film body has confirmed it is granting development, production and distribution support to over 60 audiovisual projects 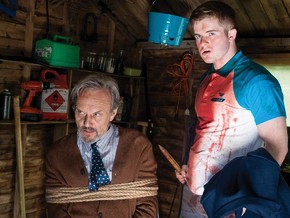