Review: Off the Rails

22/03/2022 - In his deeply touching feature debut, Peter Day focuses on the years of living dangerously

It feels strange to describe something that features a tragic loss, heartbreak and frequent run-ins with the law as “entertaining”, but New Zealand-born Peter Day’s Off the Rails is just that. There is no way of telling whether it’s intentional, but there is a bit a feel of the 1996 Danny Boyle classic Trainspotting about this melancholic film, world-premiering at the Thessaloniki Documentary Festival, even though the trainspotting is now replaced by “train surfing”.

Apparently, this particular activity (and multiple others, always dangerous) has potential – at least in the world of aspiring YouTubers, like Rikke Brewer and Aiden Knox. There is passion, sure, but soon enough, some of these boys, a British collective named Brewman, are thinking in more strategic terms: in likes, shares and subscribers. Their methods might be new, but it’s a tale as old as time – if you make money off something you love, does it mean you are selling out or just being smart about your future? And, most importantly, how far are you willing to go? As they parkour around the neighbourhood, ankles are twisted and young bodies are hurt, but that’s all part of the game. Until it isn’t, and suddenly you have to deal with the kind of pain that doesn’t just heal on its own. Just like we said – a tale as old as time.

Given these characters’ crazy antics, it’s no wonder Day’s documentary, expanded from his TV movie Parkour Changed Our Lives, is so engaging – for people who don’t like heights, or Spider-Man’s preferred methods of transport, it sure will be uncomfortable at times. But he actually talks to them, too, and finds incredible sensitivity among the “lattes, they’re banging” statements.

There is just so much sorrow to unpack. Someone tries to convince himself that “it’s not a sad life, it’s not a sad life”, or struggles with a parent who, while attempting to teach a lesson, basically renders his child homeless and lonely as a result. After a while, when you hear, “There is, like, tears in this shit” when one of the boys has to leave his childhood room behind, memories drawn out on its walls, it doesn’t seem funny at all. It feels relatable.

It’s also relatable because of the simple fact that while they are amazing performers, sometimes it’s impossible for the show to go on – especially after a perilous side flip over a train-carriage gap has gone wrong. Their online fans are impressed, leaving comments like, “Dude, you are literally insane.” But is it fine to influence people to do dangerous things? Maybe one should “inspire” instead, whatever that might entail? Interestingly enough, there is a significant age gap between Day and his subjects, not that anyone would ever feel it – he already knows there is no need for any “grow up” preaching, so he lets them do all the thinking. And the writing – when someone mentions the “live fast, die young” philosophy, even that comes with a typo. To live is to err, but they sure are trying.

Off the Rails is a UK production staged by Faction Films, Faction North and Perfectmotion. Its international sales are handled by Journeyman Pictures.

more about: Off the Rails

Review: Off the Rails

In his deeply touching feature debut, Peter Day focuses on the years of living dangerously 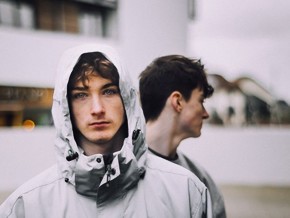