It’s onto an iconic advert for Big Babol chewing gum, which everyone forty-years-plus will easily remember (where a young cowgirl makes huge chewing gum bubbles and then pops them in rapid-fire succession), that Amazon Studios’ new original Italian series Bang Bang Baby first opens, and the tone is immediately set. Steeped in 80s pop culture, this unique audiovisual creation born out of the mind of Andrea Di Stefano - who wrote the work alongside Valentina Gaddi and Sebastiano Melloni, and directed it under the artistic supervision of Michele Alhaique (who also directed six of the ten episodes, the remaining four alternately helmed by Margherita Ferri by Giuseppe Bonito) - is an audacious hotchpotch of genres – crime, coming-of-age tale and black comedy – adorned with a visually engrossing outer layer and a dark though colourful, dreamlike atmosphere, which shifts between humour and creepiness while depicting the viewpoint of a tormented teen who finds herself plummeting the depths of organised crime in exchange for her father’s love.

Loosely based upon a true story (as narrated in Marisa Merico’s book “L’intoccabile”), Bang Bang Baby revolves around an introverted 16-year-old girl called Alice (Arianna Becheroni) who lives with her worker mother in a small town in northern Italy. It’s 1986 and glossy TV ads and sit-coms, in which everyone loves one another and everyone’s happy, beam out from Italian screens. Alice, by contrast, isn’t happy, because something weighs heavy on her heart: her father Santo (Adriano Giannini) died ten years earlier, murdered before her very eyes while they were on a ride at an amusement park with her mother Gabriella (Lucia Mascino). But one day, a familiar face leaps out at her from a newspaper: it turns out her father isn’t dead, as her mother has led her to believe all these years.

Alice wants to understand why the latter has hidden the truth from her, so she sets out for Milan in search of her paternal grandmother. Granny Lina (Dora Romano) welcomes her with open arms, as do the rest of her colourful Calabrian family. But behind her affectionate smile hides a merciless boss of the ‘Ndrangheta who leads Alice to her father Santo, now in prison. The seductive and manipulative Santo is a criminal; he’s landed himself in hot water and only his newly rediscovered “princess” can help him. “I’ve always wanted a father who’d watch Happy Days with me”, Alice tells him. She’ll do anything to have her beloved parent by her side once again. For this reason, they strike a deal: “If I do what you tell me to, will you go back to being my dad?”. For Alice, it represents a loss of innocence and the beginning of a ferocious criminal education, because love – her voiceover insists – “makes us do things which go against logic and own selves, all in the hope of being loved. But it only takes a moment for the dream to turn into a nightmare”.

This nightmare is seen through the eyes of an 80’s teen, and the film’s pop imagery, made up of the music, TV films, adverts and video games of the time, becomes a means of filtering her emotions and of tackling the shocking situations which present themselves to her. It’s a journey made by “Alice into anything other than wonderland”, explains Alhaique, where the camera moves at varying paces, alternating between panoramic shots, close-ups, wide angle shots and neon lights, before homing in on faces and patterns of breathing, notably those of the protagonist and her father, but also that of her grandmother Lina, who stands out from all the characters (who are all pleasingly multi-faceted) for her Jekyll and Hyde nature as a loving granny from the South capable of a shocking level of cruelty. The cast also stars Antonio Gerardi in the shoes of a “village idiot” of sorts, whose sudden fits of rage can be soothed by one thing only: George Michael songs.

Bang Bang Baby is produced by The Apartment and Wildside, in co-production with Enormous Films. The first five episodes of the series are available in 240 countries via Prime Video as of today, 28 April., although viewers will have to wait until 19 May for the other five instalments.

Nicole Morganti and Davide Nardini explain how the studio is looking to position itself within the Italian landscape, and announce the company’s new projects

Directed by Ludovico Bessegato and produced by Cross Productions, the young adult drama in eight episodes revolves around the themes of sexual identity and orientation 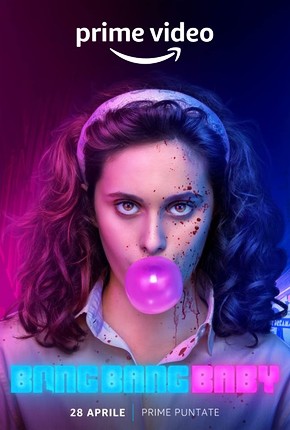