"Adventurers come, go, forget. This is the privilege of adventurers". This sentence, gleaned from the ambitious canvas woven by Pietro Marcello's new film Scarlet [+see also:
trailer
interview: Pietro Marcello
film profile] (opening today in Directors' Fortnight at the 75th Cannes Film Festival), fits like a glove the poetic researcher of cinematographic alchemy that is the Italian director, this time taking up the challenge of sculpting a work of fiction in French adapted from a Russian tale (Alexandre Grine's Scarlet Sails).

The result? A very rich tableau on the power of imagination, touching on the human, the social, love, the craft of art, female emancipation, time and its wounds, the hopes of escaping the millstone of destiny condemning to eternal repetition, the bullets of the hunters and the fall of the Icaruses, but also an addition of multiple and protean finds, not all of which are always happy. For so goes the life of those who pray to luck: "You play, you win. You play, you lose". By composing his own score and re-tuning an old, dilapidated cinema piano from the classics, Pietro Marcello opens the door to the vast world, making paper dreams come true with a film that treads the tightrope between crash and miracle.

Life is hard and cruel for Raphaël (the opaque and silent Raphaël Thierry), a damaged survivor of the First World War. In his absence, his wife died, leaving a baby in the care of the widow Adeline (the excellent Noémie Lvovsky) who takes in the lost soldier in exchange for his work on an impoverished farm. In the village, the locals' gaze weighs on the newcomer ("you would have been better off dying in the war") as a cruel secret and a whiff of malevolence hang in the air. But Raphaël, who works with wood, has "gold in his hands" and the big city (a reflection of a world changing at great speed between the two world wars) offers him opportunities to sell toys. Meanwhile, Juliette, his daughter, grows up to become a beautiful young woman (Juliette Jouan), also an amateur artist and aspiring to the magic of an elsewhere that would carry her away on her scarlet sails. And then one day, a plane (piloted by Louis Garrel) is forced to make a forced landing in the area…

Switching from a captivating, very down-to-earth, social and psychological first part (one might think of Ermanno Olmi's The Tree of Wooden Clogs) fuelled by some colourised archive footage (a remarkable and powerfully evocative piece of work), to a successive advance in time injecting more and more fairytale components with a shift in the main character from the father to his daughter, Scarlet turns out to be fascinating puppet theatre, concealing a lot of depth beneath the surface of its archetypal figures. Nevertheless, the mixture of layers (up to the almost Jacques Demy-like songs) allows some false notes (the miscasting of the woodland magician) and sometimes a patina of artificiality to emerge, which in the end makes for a work that is more bizarre than successful. But it doesn't matter, because a true artist-craftsman is at the helm, singular and rebellious, endowed with a very strong cinematographic personality, and he has a lot to express.

"For me cinema is a family"

A full battalion of French sales agents including Coproduction Office (who are wielding Ruben Östlund in competition), Kinology, Gaumont, Pathé and Orange Studio, are taking over the festival 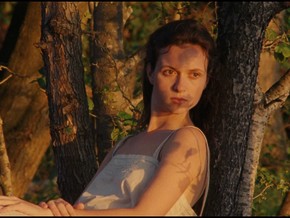