The journey embarked upon by a young Italian student aspiring to be a surgeon in the Gaza Strip and his extraordinary growth, both in professional and human terms, are at the heart of Chiara Avesani and Matteo Delbò’s stirring documentary Erasmus in Gaza, which was presented in the Contemporary Lives section of Bologna’s 18th Biografilm Festival. It’s a film which not only depicts the experience of Riccardo Corradini, the first ever student to take part in the European Erasmus university exchange programme in the tricky Palestinian area bordering Israel, but which also conveys a sense of what it means, especially for younger people, to live like a prisoner in your own home under the constant threat of bombs.

24-year-old Riccardo, who is studying medicine at the University of Siena, wants to specialise in emergency surgery and, in order to deepen his knowledge of gunshot wounds, he chooses a “hotspot” country whose hospitals are regularly full to the rafters with injured patients: the Gaza Strip, where we’re told that 18,000 individuals were wounded between March and September 2018 alone. “It’s a chance to see whether I’m up to it”, Riccardo explains while saying goodbye to friends and family in Siena. If you’re not with the press or an NGO, getting into Gaza is complicated; you never see foreign students here and, once Riccardo arrives at his host family’s home, he’s quite literally greeted by darkness on account of the electricity rationing imposed by Israel. The young doctor is nonetheless seen and treated by locals in the same way that foreigners would have been treated at other times: with curiosity, respect, and concern that he has everything he needs. “For us, it’s an opportunity to communicate with someone from the outside”, explain his medical colleagues studying in the Gaza who are forbidden from travelling and for whom “having a permit to go outside would be like winning a million dollars”.

Riccardo’s academic routine, interspersed with moments of relaxation (including a men-only dance party) and time spent getting to know the local culture, is soon shattered by the reality of the Israel-Palestine conflict, which erupts into his life with its cargo of bullet-splintered bones, amputated legs and ailing children. It’s Riccardo’s first real test on the ground and he’s upset; he questions whether he’s cut out for it all. Shortly afterwards, Israeli bombs begin falling just metres away from his house and the sensation of stepping outside of his comfort zone soon morphs into pure panic. Like other foreigners living in the Gaza, Riccardo is transferred to a safer location – Bethlehem - leaving behind the people who have become his friends, as well as his new family who aren’t allowed out “simply because they’ve got the wrong passport”. But when the waters have calmed, albeit temporarily, and he’s allowed to return to the Gaza, Riccardo enters a whole new phase in his life which helps him to realise what he really wants to do for a living.

Full of encounters, experiences and reflections, Erasmus in Gaza is a vibrant coming-of-age tale captured as it happens. The film’s dynamic and wholly non-superfluous editorial approach highlights the essence of each and every step in this young student’s growth, conveying his passion and his fears, but also the power of the brotherhood of man and the noble nature of the medical profession, in a land where people turn up their music as soon as the shells stop falling in order to celebrate the fact they’re still alive.

more about: Erasmus in Gaza

The festival dedicated to biographies and life stories is scheduled to unspool in Bologna between 10 and 20 June, and online between 12 and 22 June

“The Mediterranean doesn’t separate us; it brings us together”

We chatted to Sergi Doladé, the director of the Euromed Docs Market, which focuses on the promotion and distribution of projects from the EU and the Southern Mediterranean countries 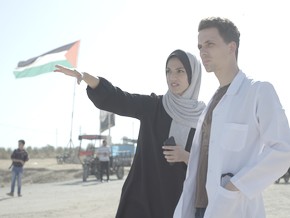