“Where are you going to find a corn field as high as an elephant’s eye in Bradford?” This question scarcely troubles Harry in his quest to remake the opening of the classic musical Oklahoma. Neither does the fact that he’s an octogenarian and can’t ride a horse. After all, cinema will always find a way.

In A Bunch of Amateurs – recently receiving its world premiere at Sheffield DocFest, where it won the Audience Award (see the news) – Kim Hopkins focuses on Harry and the other members that make up the almost 90-year-old Bradford Movie Makers, one of the oldest amateur filmmaking clubs in the world.

We begin with a montage of the club’s glory days, a sequence of amateur action films, superhero epics and travelogues all interspersed with club functions, a whirlwind of packed annual dinners, speeches and endless cups of tea.

But like the 8mm and 16mm stock that many of these moments have been filmed on, these glory days are very much in the past. The building that houses the club is now dilapidated, the outside a repository for other people’s waste and full of graffiti, and the inside falling apart. There are a handful of members, a large number of them elderly. As they sing along to a screening of Harry’s beloved Oklahoma, these harsh realities are momentarily forgotten.

In this observational documentary, Hopkins provides many moments of humour as our protagonists continue to indulge their love of movie-making. Harry fulfils his musical ambitions sitting on a chair in front of a green screen, holding on to a handbag strap in lieu of a horse’s reins. Other members cake themselves in white make-up to create low-budget horror films in the hope of winning the club’s Cinematography Award. These films will probably not be unspooling at the Palais des Festivals any time soon, but it matters little to our intrepid helmers – their films are as full of joy, exuberance and passion as any big-budget blockbuster.

Yet the doc is far from an exercise in making fun of our protagonists – indeed, they are often apt to make fun of themselves with a laconic sense of Northern English humour. As we delve into their personal lives, it becomes clear just how important the Bradford Movie Makers is. More than just an outlet for a hobby, it’s a chance for togetherness for a number of people who are often isolated. There are Harry and Colin, both elderly and nursing ill wives. Phil, one of the younger members, cares for his brother, who has cerebral palsy. When a tragedy befalls one member, he attends the weekly meeting simply because he doesn’t know where else to go. These moments are achingly human and tender, as these people try to hold on to some connection in the world. But with no new members, no funding coming in and encroaching bills, this connection doesn’t look long for this world.

It is perhaps no coincide that the narrative arc of A Bunch of Amateurs would not be out of place in the most classic of Hollywood films. As our band of cinephiles face both joy and tragedy, it seems that the pandemic will provide us all with a downbeat ending. But the cinema always gives those who deserve it a chance of redemption.

A thoroughly moving and ultimately joyful affair, A Bunch of Amateurs seems sure to have a great festival run. This is partly because it reminds us that, while we sit in the dark to watch a film, it’s more fun when we do it with other people.

This will probably not be the last time that the doc walks away with an audience accolade. VoD success looks likely as well, while a theatrical run (especially with the film being executive-produced by The Full Monty scribe Simon Beaufoy) in certain territories is also likely.

A Bunch of Amateurs is a UK production staged by Labor of Love Films. Its international sales are handled by Met Film Sales.

more about: A Bunch of Amateurs

The Best Film Award was won by Mexican filmmaker Rodrigo Reyes for Sansón and Me, whilst the First Feature Prize went to a US-Dutch co-production, Rosa Ruth Boesten’s Master of Light 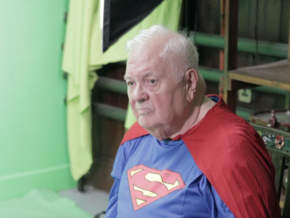