Can anger and tenderness blend? Sasha (Angèle Metzger) is a seventeen-year-old girl who just moved to a new city with her little sister Pauline (Saul Benchetrit) and her parents. “Don’t forget, no one can know” says Pauline to Sasha as they enter their new high school. Sure, but know what exactly? Just like Sasha herself for many years, we don’t really know what’s going on, and we’re eager to find out. And it’s not too long before we’re in on the secret: Sasha is an intersex teenager, meaning her sexual anatomy doesn’t fit the traditional male or female boxes. Hint by hint, we discover that Sasha was identified as a boy at birth, and that her intersexuation was always presented to (and as a result by) her parents as a disease, a biological error on her way to masculinity. Having been kept in the dark for so long, and after years of being pushed to identify as something she’s not (a boy), Sasha is ready for a new start. But she still has a lot of questions… and a fair load of anger to deal with.

Ever since its launch in November 2018, France.tv Slash (a digital channel of national public broadcaster France Televisions) has been quick and eager to produce shows aimed at young adults, and this one should easily find its audience given its warm reception at French festivals Series Mania and Serie Series. Created by Yaël Langmann (writer of the three last feature films from French director Yvan Attal) and co-directed by Jérémy Mainguy (a longtime series director whose credits include the hospital drama Les Bracelets Rouges), Chair tendre instantly brings the viewer in thanks to its energetic and accurate portrayal of Sasha’s family. In a very French way, they’re eager to diss and argue at the kitchen table as if it were part of a morning routine, and we’re here for it, especially when they involve Sasha’s little sister Pauline, an acting highlight of the series. Those rhetorical clashes also extend to Sasha’s new group of friends at school, and just make the series that much more believable, miles away from the cheesy emotional didacticism we’ve come to associate with some teen series. This makes for a highly bingeable teenage drama, though the greyish tones of the photography can underwhelm at first glance.

But the show’s main draw obviously comes from its topic of intersexuation, and the taboo surrounding it. The script acknowledges the viewer’s likely lack of knowledge, and doesn’t shy away from making those awkward conversations happen. Is it a disease? Should Sasha’s parents allow her to access surgery? Some of those important talks feel a bit forced into the narrative, especially the phone conversations Sasha has with an intersex sort of mentor she found online, whose dialogues feel like a 101 class on queer vocabulary. Another rocky example of this is the talk Daphné Bürki’s endearing mother has with her transgender friend played by queer icon Océan. “What if I ask you if you got the operation, is that transphobic?” While not extremely subtle, those few rocky scenes feel like the necessary salt for a general audience to get acquainted with the nuances of the queer spectrum, and to appreciate the countless moments of invisible isolation faced by Sasha. Taking your shirt off at the swimming pool, flirting with a boy on a Friday night, laughing along at a seemingly harmless joke, choosing a bathroom in school… Chair tendre literally gives flesh to the many problematic situations that are trivial to anyone but Sasha, or by extension, all intersex teenagers in our society. It also never loses focus of its core, an angry beating teenage heart, eager to belong to a family, to a group of friends, and who knows, maybe even to a new community. Because after all, most of us need to express our anger in order to find life’s tenderness, and Chair tendre is more than happy to remind us.

Chair tendre is produced by Jerico TV and will soon air on France.tv Slash.

The festival is reverting to its usual Lille-based timings, running 18-25 March and screening an abundance of titles, notably including 29 world premieres 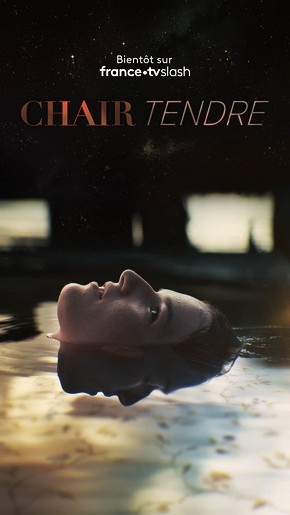