Review: The Origin of Evil

It’s a welcome thing at a major festival, even as they’ve generally increased their haul of genre pictures, however elevated or artsy of a variety: a trashy and tawdry thriller that reels you in, disarming your critical faculties. Sébastien Marnier’s The Origin of Evil [+see also:
trailer
film profile] feels like the sort of movie you might’ve caught half-asleep on late-night TV in the pre-streaming age, perhaps after having missed the first 15 minutes – forcing you to stay glued until the very end, drooping eyelids be damned. Or, to be less flattering, it feels like the kind of brisk, undemanding, back-of-the-seat entertainment that might make a few hours of a long-haul flight melt away.

Returning to the Venice Film Festival’s specially created genre and audience-friendly film sidebar, this time called Orizzonti Extra after School’s Out [+see also:
film review
trailer
interview: Sébastien Marnier
film profile] from 2018 was in Sconfini, The Origin of Evil could be described as a “frothy thriller”, and while Hitchcock and (later) François Ozon sometimes specialised in these, Marnier’s work here can’t quite vault over the clashing nature of that descriptor. Another element it has in common with other French thrillers is quite a casual attitude to pastiche and quotation, where lifts are hard to distinguish from outright steals; the script suspiciously corresponds to various design and plot elements of Rian Johnson’s Knives Out, although the crueller and more anti-humanist direction that Marnier ends up taking us in leaves a more lasting aftertaste.

Laure Calamy, one of the sparkiest French actors currently working, is the slippery Stéphane, a line worker at a fish-processing plant with her eye on upward mobility. The early stages of the plot, which is important not to fully reveal for prospective viewers, shows her alternating between caring for her incarcerated and unstable girlfriend (Suzanne Clément) and making cautious inroads into her newly discovered biological family, after discovering her father’s identity at the film’s beginning. In a very felicitous burst of fortune, Serge (Jacques Weber), this patriarch, is a local property tycoon, with a chain of hotels emblazoned with his name as well (you can feel Marnier nudging you in the tummy, almost with a 3D elbow coming out of the cinema screen); he and Stéphane even initially meet at what looks like a golf-course clubhouse.

Once at his garishly nouveau-riche residence, Stéphane has to navigate a frosty introduction to his daughter George (Doria Tiller) – who is gradually taking over his empire and literally says to her face, “You’re not wanted here” – and his vain and haughty spouse, Louise (Dominique Blanc). Blanc’s insouciant turn helps her character become as much of an audience identification point as Stéphane, upending the sexist “gold digger” archetype and twisting it into her own way of taking gleeful advantage of the filthy rich.

Titling the film The Origin of Evil is an unconvincing feint: it asks us to derive a moral stance from how the tale sees its characters, when what we see before us is so obviously cynically pessimistic about human nature. And as we learn more about what’s motivating Stéphane, despite Calamy’s considerable efforts, the characterisation as written on the page doesn’t let her sufficiently act out, and thus convince in, her volatile changes of heart. Marnier is aiming to concoct something close to Chabrol’s La Cérémonie here, but stirs in Splenda when what’s really needed is arsenic.

The Origin of Evil is a co-production between France and Canada, staged by Avenue B Productions and Micro_scope. Its world sales are handled by Charades.

more about: The Origin of Evil

The director of My Donkey, My Lover & I is once again casting Laure Calamy up front in this Chapka Films and La Filmerie production, set to be sold by Playtime

An important French presence at the 37th Namur Film Festival

The 37th edition of the Namur International French-Language Film Festival will take place from 30 September to 7 October, with a programme of no fewer than 120 films

Review: The Origin of Evil

Laure Calamy, Olivia Côte and Kristin Scott Thomas head the cast of this Avenue B production in partnership with Blonde Audiovisual Productions and Scope Pictures, sold by Indie Sales

Sébastien Marnier kicks off filming on The Origin of Evil 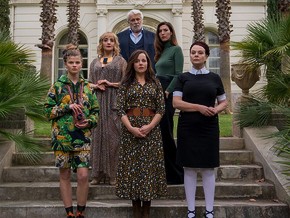