Review: Something You Said Last Night

After her heart-wrenching debut with the short film For Nonna Anna (2017), which depicts the daily life of her own grandmother and whose numerous awards include the Special Jury Prize at the Sundance Film Festival, Italian-Canadian director Luis De Filippis returns to the Toronto Film Festival (in the Discovery section this time) to present her powerful first feature Something You Said Last Night [+see also:
trailer
interview: Luis De Filippis
film profile]. Also selected for the San Sebastián Film Festival’s New Directors line-up, Something You Said Last Night explores the day-to-day life of an Italian-Canadian family who are struggling with the often tricky challenge of living together over the summer months, a period replete with private jokes and heated discussions which nonetheless end on a light note. Behind the seeming lightness of the subject explored, De Filippis’ first feature film is a powerful and aesthetically splendid ode to the family as a microcosm in which to experiment with a reassuring yet frightening form of intimacy.

Twenty-year-old aspiring writer Renatta (Carmen Madonia in an astonishing debut performance) and her sister Siena (Paige Evans) reluctantly go on holiday with their parents, forced into a form of cohabitation which puts their inevitable thirst for independence to the test. Now adults, Renatta and Siena react with amused eye-rolls to the soundtrack chosen for the car journey by their riotous mum Mona (Ramona Milano) and their taciturn father Guido (Joey Parro): a sickly blend of kitsch 1980s musical hits which the whole family sing at the tops of their voices. Once they arrive at their destination - some sort of holiday village on the edge of a lake – Siena’s rebellion kicks off in the form of drunken episodes and nocturnal revelries, while the seemingly reserved transwoman Ren, who’s grappling with a thirst for independence which she doesn’t seem to be able to placate, lets herself be lulled into the reassuring rhythms of family life. Nobody knows it, but Ren has recently been fired and needs to get to grips with financial problems which are eating away at her like a burning secret. Forced to spend the holidays with her family, just like she did when she was younger, Ren clings on to her electric cigarette as if it were an oxygen tank and contends with contradictory emotions which see her oscillating between a need to get back to her independent life and the reassuring sensation of being able to rely on a solid (albeit sometimes burdensome) clan.

Luis De Filippis perfectly captures the sensations and intimate moments which turn a family holiday into a human adventure with overwhelming emotional overtones. Complex and fascinating, Ren experiences the worry and malaise which we feel when we’re shoehorned into an everyday context which doesn’t quite suit us, the daily life typical of a conservative seaside resort which is afraid of opening itself up to the world. Secrets and things left unsaid, which are brilliantly confined to off-screen scenarios (the mysterious messages Ren sends with her phone-diary and the reasons behind Siena’s rebellion), transform Something You Said Last Night into a sharp yet moving family saga (the arguments between Siena and her mum are depicted without false modesty).

Something You Said Last Night explores trans identity in surprisingly realistic fashion, with depth, lightness of touch, tenderness and lucidity. Unlike (too) many transgender figures in film who are attributed an array of stereotypical characteristics which transform them into sad and melodramatically excluded souls, Luis De Filippis brings Ren to life using her own lived experience. The result is a character who makes fun of stereotypes and a portrait of a girl who, like so many others, must contend with a patriarchal society revolving around gender binarism. Ren’s malaise on account of her trans identity (the film’s work on sound is wonderful, reflecting the aggressive world hiding behind seemingly innocuous laughs), but also as a result of adult life, which she is slowly learning to negotiate, is expressed through powerful, poetic images reminiscent of the biting sweetness usually associated with Sofia Coppola. Something You Said Last Night teaches us to look at the world through the prism of diversity, a diversity which De Filippis transforms into luminous, poignant poetry.

Something You Said Last Night is produced by JA Productions (Canada) and Cinédokké (Switzerland), and is sold worldwide by Memento International.

more about: Something You Said Last Night

The film, awarded with the Shawn Mendes Foundation Changemaker Award at the Canadian festival, is now screening as part of the New Directors section of the Spanish festival

“To me, this is the power of cinema – to transmute another’s experiences and see yourself in their struggles and victories”

Review: Something You Said Last Night

IFFR’s CineMart is all set for its 37th edition 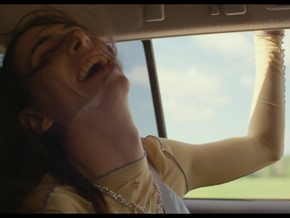