19/09/2022 - Directing her first feature film, Dinara Droukarova dives into the wake of an unattached woman venturing into the decidedly virile world of fishermen in Iceland

Dinara Droukarova in Woman at Sea

"I’ll go somewhere else, further north. I’ll climb to the summit of the highest ice mountains until I can’t go any further. Then I’ll jump and I’ll fly” – “You’ll die, more like". A hard-hitting portrait of a woman struggling to find her place in the unrelentingly tough, male world of fishermen trawling off the coast of Iceland is the subject of Dinara Droukarova’s first feature-length directorial effort Woman at Sea [+see also:
trailer
film profile], which was unveiled in the 70th San Sebastián Film Festival’s New Directors competition. Hers is a credible, no-frills adaptation - based upon Catherine Poulain’s novel of the same name - which cuts to the chase (the high price which must be paid by free female spirits) and whose actress embodies the lead role brilliantly.

"I want a boat to adopt me". Rocking up in a small fishing harbour in Iceland with a backpack, and nothing but small change in her pocket (along the lines of Vagabond, sleeping under the stars in abandoned buildings), petite, 35-year-old Frenchwoman Lili is looking for work on a local trawler. But she’s never fished before, she doesn’t have any ID and she racks up multiple rejections before skipper Ian (Belgium’s Sam Louwyck) hires her for the Rebel, whose crew is now composed of six men and one woman. It goes without saying that Lili’s appointment is met with a certain scepticism, if not outright animosity ("what the hell is she doing here?", "we don’t want people like you here, tourists who are only interested in extreme experiences") in this tiny, incredibly tough and coded male community where words are few and far between. She’ll need to prove herself in order to win their respect, and she’ll also need to dig deep, because life at sea, as it turns out, is extremely physically demanding. But, vulnerabilities or not, Lili isn’t the type to give up…

"Eat, you skinny wretch", "Are you a woman?" "She’s a tigress". Charting Lili’s progress over the course of a unique fishing season, Dinara Droukarova strikes a healthy balance between perfectly rendered documentarian components (the entire Tayloristic process of fishing: the nets used, the hold where the fish are packed in ice after being killed, the cleaning involved, meals and nights spent in very close quarters, night watches, exhaustion, slips on deck, risk of injury, discipline at sea, quota-based pay, the complex nature of life far from any family, trips to bars on land, the surrounding tendency to gravitate towards alcohol, etc.) and the "novelistic" side of the movie, revolving around this singular heroine (marginal but also on the hunt for an adoptive “family”) whose past is never revealed to us. It’s a simple and stripped-back debut feature film which provides a wonderful role for its director, who has, herself, gathered together a cast composed of various nationalities (notably including Björn Hlylnur Haraldsson, Dylan Robert, Antonythasan Jesuthasan, Hjörtur Jóhann Jónsson and Magne-Håvard Brekke) who are perfectly at ease in this Icelandic environment, venerating nature in all its forms.

more about: Woman at Sea

Directing her first feature film, Dinara Droukarova dives into the wake of an unattached woman venturing into the decidedly virile world of fishermen in Iceland

Filming to commence in June on Dinara Drukarova’s Grand Marin

The actress will also star in the cast of this Slot Machine production, alongside Dylan Robert, Antonythasan Jesuthasan, Sam Louwyck, Hjörtur Jóhann Jónsson and Magne-Håvard Brekke

The upcoming films by Thierry de Peretti, Chloé Mazlo and Dinara Droukarova will also be co-produced by the French-German channel 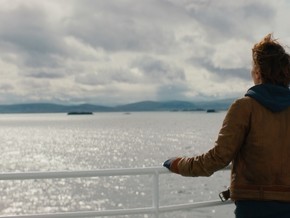