23/09/2022 - Sebastián Lelio’s latest effort is a departure from his filmography, treating us to yet another wonderful performance from Florence Pugh and revealing the immensely talented Kíla Lord Cassidy

Florence Pugh in The Wonder

Sebastián Lelio’s new film sees the director competing for the San Sebastian International Film Festival’s Golden Shell for the very first time. The Chilean director is making his return four years after his previous work and he’s doing so in the company of one of the biggest stars of the moment: the staggering Florence Pugh. With The Wonder [+see also:
trailer
film profile], the filmmaker is exploring period film for the very first time, inspired by Emma Donoghue’s novel of the same name. The film adaptation of this fascinating story takes us to Ireland in the mid-eighteenth century. This story unfolding in a small village revolves around Ana, a girl who hasn’t eaten anything for months but who is still, miraculously, alive.

The film’s opening is curious to say the least. In an industrial warehouse, we see a series of sets built on scaffolding while an off-screen voice invites us to delve further into the story the film is recounting, asking us to believe in it with the same passion as the people who worked so hard to bring it to life. Immediately afterwards, we follow the camera on set, finding ourselves face to face with Lib, the main character embodied by Pugh with brilliant force. Lib is an English nurse hired by the authorities of the village where Ana lives. Her mission is to stay by the girl’s side in order to testify to the extraordinary event taking place.

To begin with, Lelio demands patience of the audience, because things unfold at a slow pace - the same pace which governs the lives of the inhabitants of this small village. We explore their reality, as required by the film, alongside its protagonist, and we soon learn that Lib isn’t easily fooled. Her difficult past has forced her to keep her feet on the ground, and she seeks to uncover the truth hiding behind an alleged miracle she doesn’t believe in. At this point, it’s best to stop and allow the audience to discover the mystery of the film by themselves.

But it’s only fair that we highlight the qualities of this film, whose narrative unfolds with great precision and which seems far more classic, formally speaking, than the Chilean director’s previous works. The most technically accomplished aspect of the film, meanwhile, is Ari Wegner’s dazzling photography, who impresses once again after his recent Oscar nomination for The Power of the Dog [+see also:
film review
film profile].

Mention must once again be made of Florence Pugh’s wonderful work in this movie, as she continues to chalk up excellent performances in high-quality films. Amongst the various supporting actors, Toby Jones and Tom Burke use their characters as perfect vehicles to flaunt their abilities. But the real revelation of the film is young Kíla Lord Cassidy, whose interpretative performance of the miraculous Ana reaches levels to which only the most talented can aspire.

The Wonder is produced by Ireland’s Element Pictures and the UK’s House Productions, and will be available all over the world courtesy of Netflix.

more about: The Wonder

Sebastián Lelio’s latest effort is a departure from his filmography, treating us to yet another wonderful performance from Florence Pugh and revealing the immensely talented Kíla Lord Cassidy

Starring Jodie Comer, Mark Strong and Benedict Cumberbatch, the picture follows the trials and joys of new motherhood in the midst of devastating floods

39 world premieres, and various prime cuts from Cannes, Venice and Telluride have been announced for the September gathering

Filming starts this summer on the Irish-UK co-production, adapted from the Emma Donoghue (Room) novel by screenwriter Alice Birch 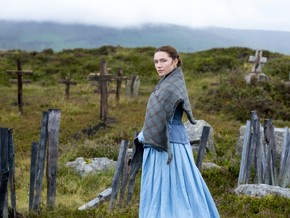