26/09/2022 - Josip Žuvan’s debut feature, about feuding families and kids chasing online fame, is rich in detail and deeply rooted in the Croatian way of life

The year 2022 should be remembered as a successful one in Croatian cinema, especially considering the feature debuts that made a splash on the festival circuit. First, The Uncle [+see also:
film review
trailer
interview: Andrija Mardešić and David …
film profile], written and directed by Andrija Mardešić and David Kapac, premiered at Karlovy Vary, and then Juraj Lerotić’s Safe Place [+see also:
film review
trailer
interview: Juraj Lerotić
film profile] premiered at Locarno and triumphed at Sarajevo. One more title can now be added to the list: Josip Žuvan’s Carbide [+see also:
trailer
interview: Josip Žuvan
film profile], which had its world premiere at San Sebastián and had the honour of closing the New Directors section.

Nikola and Antonio (played by newcomers Franko Floigl and Mauro Ercegović Gracin, respectively) are pre-teen kids, next-door neighbours and best friends from an unnamed, semi-rural suburb of a coastal town in Croatia. Since there is not much to do in their neighbourhood, especially during the winter holidays, their favourite pastime is large-scale, low-tech pyrotechnics: blowing up kegs with carbide and filming the chaos with their mobile phones, in the hope of becoming YouTube sensations.

The trouble is that their families are feuding, this time over an easily solvable problem of water and mud flowing down from Antonio’s family’s house to Nikola’s family’s yard. However, it seems more like a current excuse to continue a quarrel that started years ago, instigated by Antonio’s emotionally detached grandfather Vlado (Zdenko Jelčić) and Nikola’s grandmother Ivka (Asja Jovanović), now seeping down to the generation of the kids’ parents, Nikola’s father Zoran (Serbian actor Ljubomir Bandović) and mother Marija (Marija Škaričić), as well as Antonio’s single mother Ines (Ivana Roščić). Over the course of one holiday season, a number of secrets at the root of the feud (or merely fuelling it further) will be revealed (or at least hinted at), and the way things pan out will also affect the relationship between the two childhood friends.

The plot might seem clichéd, but the attention to detail in the character-building and the precise doses of the revelations dished out in Žuvan’s script make the film feel quite credible, while the choices in terms of the production and costume design (handled by Petra Poslek and Katarina Pilić, respectively), and especially regarding the music heard from the TVs, radios and mobile phones (consisting of saccharine Croatian mainstream pop), serve to enhance this authenticity. The various insights into Croatian society, torn between traditions (gerontocracy and patriarchy complementing each other) and modernity (the fierce race for technological gadgets and online prestige, measured in likes, shares and subscriptions), are woven into the script masterfully.

The actors are the ones who benefit the most from Žuvan’s detailed and measured approach. Both of the young performers are quite natural in their roles. Ljubomir Bandović, playing a temperamental, yet frustrated, man with chops he has already mastered in a number of recent Serbian series, proves to be a worthy addition to Croatian cinema, while the toned-down approach that both Marija Škaričić and Ivana Roščić adopt speaks volumes about their characters’ positions within their own households. Finally, character actress Asja Jovanović proves to be a proper scene-stealer as the menacing grandma insulting everybody in the vicinity.

On the craft level, the decision to mix long tracking shots and some hand-held camerawork by Tomislav Sutlar, in drab and murky colours, proves to be a shrewd one. On the other hand, the pace of the film is occasionally a little too slow, but the mobile-phone clips edited into the material by Borna Buljević add to the dynamism of the movie. In the end, Carbide might not be as explosive as the title suggests, but it is certainly simmering with tension.

Carbide is a Croatian-Serbian co-production staged by MaXima film and Biberche Productions. Wide is handling the world sales.

The Croatian director’s debut feature is a drama set in Mediterranean suburbs during the winter, mixing the motifs of a family feud and kids chasing internet fame

Josip Žuvan’s debut feature, about feuding families and kids chasing online fame, is rich in detail and deeply rooted in the Croatian way of life 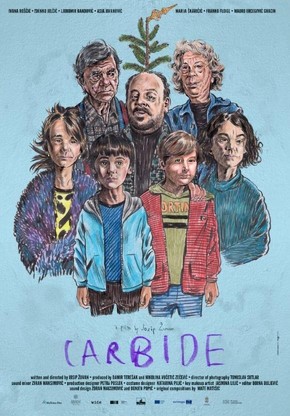 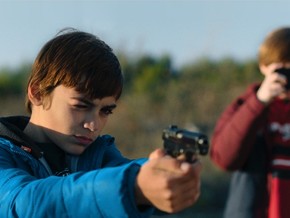