25/11/2022 - IDFA Best Director Award winner Simon Chambers comes uncomfortably close to his protagonist in his film, but then reveals a lot of himself, too

Shakespeare, of all people, was all over IDFA’s selection this year, especially that famed “All the world’s a stage” statement, which was repeated in Dreaming Arizona [+see also:
trailer
interview: Jon Bang Carlsen
film profile] and also in Much Ado About Dying [+see also:
trailer
film profile], which scored Simon Chambers the Award for Best Directing (see the news).

Chambers talks about his own family here – his uncle David, to be exact, who is frail, ailing and alone. It might be that this man, well into his eighties, really sees himself as King Lear, misunderstood and abandoned by all. Or he just loves the attention – always has, apparently. But it’s not some cheery portrayal of an elderly gentleman, actor and teacher, preparing for his final bow. It’s uncomfortable, sad and plain odd sometimes. In other words, it’s interesting.

With its horror-like beginning, pouring rain and a close-up of an elderly man, howling as if in unimaginable pain, Much Ado About Dying is not about the feel-good. It might simply be because David’s life is not easy. Surviving on tins of soup, he hasn’t left the house in years, squirting toothpaste all over electric sockets – he heard that mice aren’t too fond of peppermint, it’s revealed here. It’s petrifying, witnessing these conditions, and yet not exactly surprising. So many people are existing this way, and sometimes, unlike David, they can’t even call anyone to tell them they might be dying.

David, it is quickly established, has no intention of doing so in the end. At least not right away. He makes for quite a protagonist: part show-off – “I wasn’t just doing it for the camera,” he claims – part desperate person dominated by his sick body. “It wasn’t a great thrill, but it was lovely,” he states about his first sexual encounter. He was probably told to disappear his entire life, so he just continued to do so later on, hiding away in his flat, listening to music, fake-playing the piano as if possessed.

But it seems that part of the film’s melancholy comes directly from Chambers, who is sharing some insights into his own life, too. He also seems lost, hiding away somewhere in India like teens in the 1990s. He struggles with his sexuality, coming out of and going back into the closet. Perhaps witnessing his uncle’s gradual demise brings out some fears in him. Perhaps by helping him out, he can convince himself that his future will be very different.

With a story this personal, exploitation and intimacy always risk going hand in hand, as Chambers frequently shows what others would probably hide. There are so many talks about growing old, or dying, with dignity. It’s hard to do that with the camera present, ogling your skin. But even though he is so exposed here, David doesn’t seem to mind all that much. He is one thing, and his body, one that keeps betraying him, quite another. Maybe it’s Chambers’ presence that makes it all feel a bit more equal. This way, it’s a story about two lonely people and two separate struggles. And the fact that singing along to Hot Chocolate will always cheer everyone up.

Much Ado About Dying was produced by Ireland’s Soilsiu Films and Simon Chambers.

more about: Much Ado About Dying

IDFA Best Director Award winner Simon Chambers comes uncomfortably close to his protagonist in his film, but then reveals a lot of himself, too

IDFA all ready to kick off

This year’s line-up, which includes 277 films, has been described by artistic director Orwa Nyrabia as “eclectic” and “united only by originality” 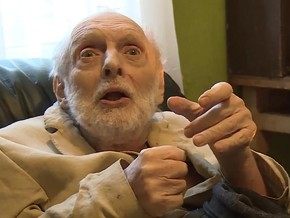 Close reigns supreme at the Ensors

The 45th edition of Clermont-Ferrand comes to a close