16/03/2005 - The extraordinary and true story of Paul Rusesabagina, a Hutu married to a Tutsy wife who "while everybody in the world had their eyes shut, he kept his arms wide open"

'While everybody in the world had their eyes shut, he kept his arms wide open.’ Hotel Rwanda, in competition a month ago at the Berlinale, is the extraordinary and true story of Paul Rusesabagina, a Hutu married to a Tutsy wife who, in an attempt to protect his family, ends up risking his own life to save 1268 people. Paul is the manager of the Milles Collines Hotel in Kigali and he believes in mankind and in justice. When the genocide starts, he is too optimistic to realise immediately the threat and horror in what is going on. Despite his wife and friends’ pleading him to move, he chooses to stay in Rwanda. When the genocide starts taking awful proportions, Paul’s means of protecting his family is to bring them to the Mille Collines Hotel, property of Sabena, for he trusts Belgium and the rest of the world to come and help Rwanda. His natural kindness, his generous heart and his courage lead him to welcome hundreds of refugees to hide them from the Hutu militia which is increasingly agressive. When Paul realises that the world actually does not care and that everybody prefers bearing their heads in the sand, it makes him even stronger and he decides to carry on this fight for survival on his own. Hotel Rwanda tells the true story of a national hero, a story that does not go without somewhat staining the Occidental world’s clean conscience.

Terry George is well-known as a committed script-writer for In the Name of the Father and The Boxer. To tell this story about Rwanda, he met not only the real Paul but also hundreds of survivors. Subsuming the documentary aspects of this harrowing piece of history, the Irish director presents a real, totally mastered fiction feature. By choosing the point of view of a man and his family on the 1994 events, from the first killings to the complete genocide it turned out to be, he makes Hotel Rwanda very human. Far from indulging into the easy pathos of horrible images, Terry George has a more subtle approach : emotion, here, comes from small things brought up with much accuracy by a carefully built script. The film is very discerning in the way it depicts the shattered hopes of an entire ethnia, left alone by all the others countries’ obstinate indifference.
The beautiful picture, juxtaposing horror and romance, love and tragedy, gives the plot considerable impact, made even stronger by the clever set of actors. Don Cheadle fits perfectly into the role of Paul and conveys a powerful impression of him through his eyes, his gestures, the very tone of his voice. His partner, Sophie Okonedo – who had a small part in Dirty Pretty Things, by Stephen Frears— also gives a very genuine interpretation of her role, adding to the general romance, and tension. Some star actors participated in this film, such as Nick Nolte and Joaquin Phoenix, but they were all so humble as to let the strong story come first.

Although the script was based on the directors’ travels to Rwanda, the film was shot in South Africa, not only for practical reasons but also for safety reasons. Since it was ruled out by Hollywood producers, who only see a script as commercial material or not, Hotel Rwanda was produced by Kigali Films (England), Inside Track (England), Mikado Film (Italy), Miracle Pictures / Seamus, and the Industrial Development Corporation of South Africa.

The extraordinary and true story of Paul Rusesabagina, a Hutu married to a Tutsy wife who "while everybody in the world had their eyes shut, he kept his arms wide open"

The Courage to act

In his second feature film, in competition at Berlin, the Irish Terry George tackles the issue of the general indifference of all countries regarding the Rwandan genocide through a real story

The American Don Cheadle, whose talent was confirmed by such films as Traffic and Ocean’s 12 is litterally rivetting in Hotel Rwanda where he plays Paul Rusesabagina

Atiq Rahimi explores the bonds between violence and the sacred through the roots of the Rwandan genocide in 1973, in the world of seemingly innocent privileged young women

Birds Are Singing in Kigali: The ornithologist and the wounded birds

KARLOVY VARY 2017: The film by Polish directors Joanna Kos-Krauze and Krzysztof Krauze (who recently passed away) takes a brave and experimental approach to the consequences of the Rwandan genocide

A comic thriller. Eccentric, melancholy and disenchanted characters very much in the tradition of Irish cinema.

The Guard, a buddy movie full of laughs

With the ugly title Un poliziotto da happy hour (the original is The Guard) a comical thriller set on the Irish West coast comes out on Italian screens. "Comical thriller" is already an oxymoron...

Director and double Oscar nominated screenwriter Terry George (Hotel Rwanda, In the Name of the Father) will shoot heist comedy Whole Lotta Sole in Belfast through April and May. The film will...

The massacres that took place in Rwanda in 1994 at the height of the ethnic conflict between the Hutus and Tutsis will be the focus of the forthcoming film by Polish directors Joanna and Krzysztof... 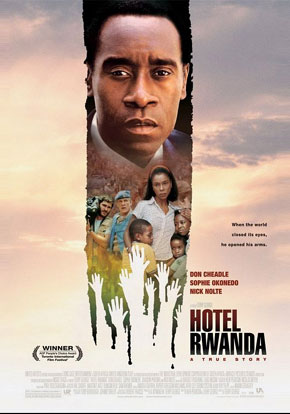