14/04/2005 - A film which speaks of things and people from our country sotto voce, with such a mixture of tenderness, absurd mildness and melancholy

"Deep down, my characters are all bored out of their mind. They hope to experience something different but don’t give themselves the means to. Like us, they are all fragile, they are wracked by doubts, they all need tenderness. But rather than admit this, they slowly let themselves go under. They don’t realize that they are slowly falling asleep. My heroes are like those little stars whose heat can only be felt when they implode, like the supernovas that shine one last time before dying for good. I know they won’t die "for good". I hope they will go beyond that. For me, they are ultranova." (Bouli Lanners, interview in pressbook)

On 27 April 2005 the successor to Totò the Hero, Man Bites Dog, My Life in Pink, The Carriers Are Waiting, Rosetta... is scheduled to hit belgium screens, a film anchored very much in its homeland and yet boasting a universal feel. A film with a degree of originality about it and which speaks of things and people from our country sotto voce, with such a mixture of tenderness, absurd mildness and melancholy that one cannot help but succumb to the charm. A film that features winter, fog, empty spaces in the middle of nowhere, bistros whose bars are frequented by solitary singles, by loves that dare not speak their name and deaths that occur meaninglessly on the bend of a road. Vaguely a western in which lonesome cowboys co-exist with spaceship-less extraterrestrials, all against a background of human warmth. This film, which will surely have the queues forming outside the cinemas, is called Ultranova [+see also:
trailer
interview: Bouli Lanners
film profile], and is the first full-length feature film of Bouli Lanners.

We know Bouli from his short films, Travellinckx and Muno, which were stamped with the personality of the young Liège actor-director. He likens his films to jigsaw puzzles, comprising dozens of pieces, each containing little stories people have told him, or which otherwise came to his attention, or on which he eavesdropped at the bars of various cafés. But these pieces have to be fitted together to make up a picture capable of moving us. The stories require worthy mouthpieces in the shape of easily-recognisable characters who can carry them off. That’s down to the skills of the author, the scriptwriter and the director. Bouli had shown us that he was capable of performing this little miracle in his own inimitable style, the same style that we recognise magnified and surpassed in Ultranova.

The film introduces us to Dimitri, a young twenty-something. He’s considered strange. He doesn’t mingle, although he does have some contact with Jeanne, his downstairs neighbour, who is intrigued by this silent young man about whom, and about whose past, rumours abound. Dimitri is part of a team of three sales reps who sell turn-key houses, to be constructed in allotments way out in the country. A life that isn’t as fulfilling as it might be but which will do until something else turns up. Jeanne has a friend, Cathy, a colleague in the furniture warehouse where they both work. One day, Dimitri and Cathy meet at the foot of Jeanne’s staircase. They arrange to meet up again. Cathy, the adopted daughter and Dimitri, the orphan son (as rumour as it), are attracted to one another, but for this attraction to be transformed into love, one of them has to commit, that is, take risks.

Beginning with this stripped down canvas, Bouli recounts his stories in a minor key, inviting us to share the life of his characters : the sales trio, the two girls, and also the waitress in the café (who, according to one of Dimitri’s colleagues, is pregnant), an unlucky hitchhiker and others. Each and every one, somewhere along the line, is flawed. They none of them feel comfortable in the world in which they live. They wallow in nostalgia for a long-gone past or, alongside a mediocre reality, invent a world of their own. All of them, in the company of others or in spite of the others, suffer a terrible solitude, which perfectly reflects the zeitgeist. There is a touch of the Roy Orbisons about the disillusioned way in which these people make their way in the world in which they live without recognising it as their own. The director, however, offsets this sadness and melancholy by little touches here and there of weird, off-the-wall humour. Slapstick humour, a cross between Keaton and Kaurismaki. And the sauce, thus lightened, thickens. Nevertheless, what prevents this film turning into just another "down-on-their-luck" tale is Bouli Lanners’ attitude towards his characters. He loves them, these ordinary misfits, casting a protective but never condescending, never wicked, eye over them. That even goes for the rep who acts like a complete idiot. He shows the extent to which the guy is suffering, how he is the victim of the ambitious dreams with which he tortures himself as he tries to fit into a social model which is the round hole that will never adapt to his square peg.

Where the characters go, the camera follows, sticking to them like a second skin, and capturing the slightest expressions on their face but always keeping them in context. Watch and admire the impressive way in which the camera sneaks into the furniture warehouse, artfully dodging between the piles of boxes and pallets before closing in on Cathy and Jeanne who, for their lunchtime break, have made themselves an island of armchairs, tables and cardboard boxes. In "Le Rustique", a roadside bar in the middle of nowhere, the camera is more bar-fly than fly-on-the-wall all the easier to eavesdrop on the patrons’ conversations. Even just following the lovelorn look of one of our salesmen who is eyeing up the waitress and finding that there is nothing more attractive than a pregnant woman and wondering if her breasts have already changed size and shape, until the roles are reversed and our man is maliciously confronted with his fantasies. In addition, these huge landscapes of empty spaces and misty plains under assault from rain and wind. Not forgetting the highly overcast sky ... From all of this there emerges a poetry of the everyday which is the essence of Bouli’s dream and into which he can smoothly inject his rather unique brand of humour. A poetry that speaks of recognisable things and people, and with which we feel at home.

Certainly, in Ultranova, there are no indestructibles saving the world, or square-jawed gangsters making their getaway in vehicles with tyres a-screeching. Nor are there any Dante-style explosions or computer-generated landscapes, just a cinema turned on its head, minimalist, purged and naturalist, beating to the slow rhythm of the characters. Bouli isn’t a Liégeois for nothing. Simenon is present, but not his dark, despair-ridden pessimism about human nature. The man wants, in spite of everything, to believe in a happy ending for his "ultranova." If Happiness, My Own Private Idaho, Smoke, Drifting Clouds, Western and The Man Without a Past have been globally successful, there’s no reason why Ultranova which is of the same ilk, and also stars the qualities of humour, sincerity and humanity, cannot follow in their footsteps.

Artist-cum-set-designer-cum-actor with an already impressive back catalogue, he of the booming voice, the discreet but ambitious film-maker

A film which speaks of things and people from our country sotto voce, with such a mixture of tenderness, absurd mildness and melancholy

As honest as possible

Known to the public at large as a "a natural born comedian", who has had supporting roles in comedie and drama, Bouli Lanners has now directed a unexpected film, sad and beautiful

A Portrait of Marie du Bled

Her first film and she has one of the supporting roles and also narrates. A no-risk ploy by the director as, when she’s onscreen, she is mesmerising

The Belgian filmmaker is currently working on an adaptation of the novel by French writer Serge Joncour, which won the Prix Femina in 2020

Eurovision Film Week to warm up for the European Film Awards

Nostalgia as a narrative driving force"

A coming-of-age tale, family rootlessness, the importance of nature: the Belgian director talks about his favourite themes at the heart of his third feature, The Giants.

The misadventures of three teenagers left to their own devices. Sensibility and humour in a captivating film, unveiled in the Cannes Directors' Fortnight 2011.

On August 9, Belgian actor-director Bouli Lanners began shooting on his third feature, The Giants. While Bouli the actor is well-known to Belgian audiences (in particular for having taken part in... 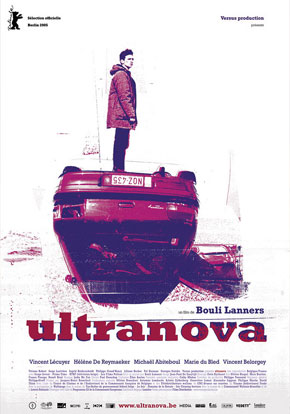