02/06/2005 - A strong and convincing feature debut, a Bergmanesque piece of family reunion with light brushes of humour, set in the picture perfect heart of Sweden, the province of Dalecarlia

Maria Blom’s Dalecarlians [+see also:
trailer
interview: Maria Blom
interview: Maria Blom
film profile] (Masjävlar) , three times winner at the Swedish Oscars 2005 (Guldbagge awards) is a strong and convincing feature debut, a Bergmanesque piece of family reunion with light brushes of humour, set in the picture perfect heart of Sweden, the province of Dalecarlia. An ideal mix which has promptly thrust the film to the top of the local chart with over 800,000 admissions since its December release.

Mia (Sofia Helin), a Stockholm-based single woman in her thirties at the peak of her career, recovers from a hang-over and painfully sets in motion to visit her family for her father’s 70th birthday. She goes back to a small village in the Swedish province of Dalecarlia, north of Stockholm, that she left 15 years ago to ‘make’ it in the big city. She is expecting a quiet celebration with her closest family and friends, but her eldest sister Eivor (masterly played by stage actress Kajsa Ernst), a control freak on the verge of a nervous breakdown, has organised a big party at the local community centre. As soon as Maria sets foot at her parents farmhouse, she is confronted with past demons and family problems that she conveniently had left behind. Her loving parents want to give her a plot of land at the bottom of their property to make sure she will come and visit them more often. But the gift provokes Eivor’s fierce jealousy and enhance her long-supressed but yet so vivid dislike of her younger sister. The middle sister Gunilla (Ann Petrén) just returned from a trip to Bali where she left a young lover and found new strength to deal with her own insecurities and past broken marriage.

Mia meets old acquaintances, some that she can’t recognise, others that she missed: her neighbour Barbro, the only one who actually listens to her and understands her, and her adult son, an old flame haunted by his father’s suicide ten years ago to the day.
Mia’s presence awakens old conflicts that reach a climax during her father’s birthday party, where family and friends let go of their frustrations and anger under the influence of akvavit.

Maria Blom’s strong sense of characterization and theatre background makes of Dalecarlians a well paced and assured first attempt to filmmaking. Choosing the familiar setting of Dalecarnia where her father’s family comes from, she makes a realistic yet tender portrait of the local people, famous for their stubborness and fear of moving even just half an hour away from their province. Blom gives the right balance of drama and dry humour –again typical to Dalecarlians- that had already made the theatre play on which the film is based, a success with the Swedish audience. And the universal theme of mis-communication and feeling of loneliness within a family should make Dalecarlians appealing to an international audience as well.

The whole project was put together and supervised by the experienced Swedish producer/entrepreneur Lars Jönsson who also launched successfully Lukas Moodysson and Josef Fares. The film was produced by his company Memfis Film in co-production with Film i Väst, the Swedish national broadcaster SVT, Zentropa Entertainments5 in Denmark with support from the Swedish Film Institute and Canal + in Sweden.

Some excerpts from the script

Mia is the youngest sister, the latecomer to the family

A strong and convincing feature debut, a Bergmanesque piece of family reunion with light brushes of humour, set in the picture perfect heart of Sweden, the province of Dalecarlia

One of the 'new faces of Swedish cinema', Maria Blom tells Cineuropa about her first experience behind the camera and her passion for actors

Pottan thinks she is going to summer camp, but ends up in outer space

Swedish director-producer Petter Lennstrand will unite his puppet characters with live action for his feature debut, currently shooting outside Göteborg

HALLÅHALLÅ - Blom is back for her new feature

Swedish director Maria Blom has cast Maria Sid as the lead in her "warm comedy about love and rebellion" shooting in her home city of Falun: "It's like taking work home."

In its latest round of production support, the Swedish Film Institute awarded a total of SEK21.5m to six feature films, including three co-productions with France, Denmark and Ireland. Directing... 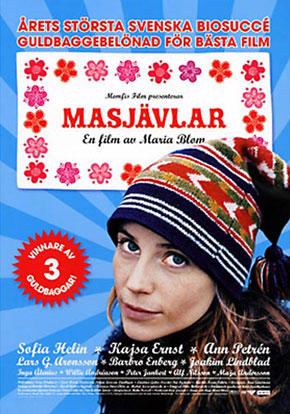