20/07/2005 - Inés París and Daniela Fejerman definitely confirm their preference for modern themes with social innuendos : in Semen, a love sample , they talk about artificial insemination

After the success of A mi madre le gustan las mujeres, the working-team is back together for Semen, a Sample of Love, a co-production between Bocaboca Producciones S.L. and Future Films Limited.
In this bitter-sweet comedy, chance plays a crucial role in the lives of all the characters, Serafin (Ernesto Alterio), a very rational biologist, Ariadna (Leticia Dolera), an artist of the flying-trapeze who thinks magic and passion rule the world, and Serafin's eccentric father (Héctor Alterio) who shares the falts with his son.

The film starts by showing images of Serafin's childhood in the 70's, presenting this period as that of the death of beautiful ideals and pure love, defeated by private interests. Then, a clever ellipsis brings us directly into the present. Serafin is now all grown-up and works as an expert in artificial insemination. He is quite meticulous, for his job is all about studying microscopic elements the good quality of which depends on how fast they are: spermatozoids. There are all kinds of them: some are fast, others lazy, or maybe just tired...
It all starts when Serafin meets Ariadna, a patient at the hospital where he works, and falls madly in love with her. She is trying to get inseminated but the treatment fails and the poor girl is sad and lonely and afraid of trying it again, for lack of money. Serafin promises to find her the best sperm ever. After many days spent analysing much raw material, he finally finds 'the perfect come' but the vial breaks and the precious substance spills. As a hero of the microscopic universe, Serafin is willing to sacrifice and donate his own sperm to help his princess. Eventually, he manages to conquer Ariadna's love, although the trapeze artist is not only suspended between the sky and the earth but also between love and her work.

Semen is a 100% European comedy in which the directors never yield to the temptation of using 'local' humour, so that any European can perfectly identify with the characters. The film may or may not be successful in Spain; it still has great potential for many other countries. Clearly, the universe described in this movie is so 'edgy' that it takes time to get used to it and accept the characters just as they are, but Semen will definitely please comedy lovers – the nostalgic ones will certainly enjoy the reference to old Benny Hill shows.

Ernesto Alterio shows once again how gifted he is for comedy, just like his father on the screen and in real life. As a matter of fact, the Spanish often refer to the 'Alterio dynasty', since the father, Héctor, was followed by his children, Ernesto and Malena —who is well-known for the TV series Aquí no hay quien viva.

Semen also introduces the very talented actress Leticia Dolera, whose most important role so far was in a teenage TV soap. In Semen, she is different, more mature, proving to be a real professional, able to play two characters (Ariadna and Penélope) who are as different as can be in all respects.

Thus, two ways of playing, two different worlds can be seen on the screen: Ernesto Alterio, actor out of heredity, is very efficient but slightly impersonal, while Leticia Dolera is a self-made woman capable of adapting constantly and of being so intense that the notion of 'artistic heredity' seems perfectly challengeable.

more about: Semen (A Love Sample)

A big launch for a clever comedy

Producer out of passion

César Benítez created Cristal Producciones in 1988. Soon after that, the company got kid-sisters and in 2001, the whole family merged into one company: Bocaboca Producciones

Inés París and Daniela Fejerman definitely confirm their preference for modern themes with social innuendos : in Semen, a love sample , they talk about artificial insemination

Daniela Fejerman wraps the shoot for La espera in Lithuania

The filming of this intense, personal drama has come to an end; the movie examines the difficulties and ins and outs of a process whereby a Spanish couple try to adopt a child in Eastern Europe

What if Shakespeare and Cervantes had met? What would they have said to one another? Would their genius have brought them together or made them rivals? The fictional encounter between the two...

"In terms of creativity, this is a wonderful period, but we need new rules for tax relief, to unify the audiovisual sectors through a single agency, to stem the domination of US distribution",...

Both directors confirm their preference for modern themes with social innuendos, such as artificial insemination 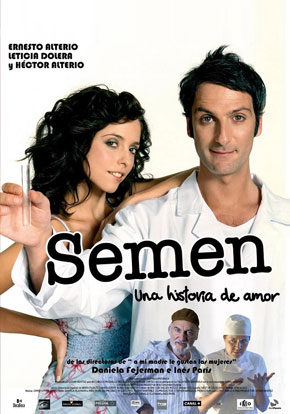