09/09/2005 - "There is no such thing as misunderstanding. Only people who are hard of hearing". (Pierre Rey, Une saison chez Lacan)

L’Enfant [+see also:
trailer
interview: Luc & Jean-Pierre Dardenne
film profile] is reminiscent of a theme explored by Jean-Pierre and Luc Dardenne ever since Falsh, their very first full-length feature film; the point at which humanity ends and inhumanity begins. What distinguishes the one from the other? What happens when you live outside the parameters set by society to ensure that its citizens remain on the straight and narrow?

Bruno (Jérémie Renier) is a young man who lives in a world with its own set of rules and ethics, a world where all things are more or less equal and where, he believes, everything has its price. He lives with his girlfriend, Sonia (Deborah François), in precarious and somewhat risky fashion. Nonetheless, if Sonia looks forward to approaching motherhood with confidence and tenderness, Bruno, the boy in a man’s body, neither feels nor intends to feel responsibility towards his son, Jimmy. His mobile telephone is the ideal tool to ensure his daily survival on a diet of petty thieving and drug deals. Selling Jimmy, the baby, seems to make sense. Lots of couples are dying to adopt. Who needs an official application process? "What’s that face for ? we’ll make another, we got the dosh... look" divulges Bruno, a thoughtless manner (so to speak) to Sonia when she starts to fret about baby Jimmy’s disappearance, "Where is he?", Sonia keeps asking, only to be met with a: "'Aven't a clue, 's over, move on" from Bruno.
Things then go rapidly downhill for Bruno. All hell breaks loose. The tension is palpable. By putting Jimmy up for adoption, Bruno loses the love of Sonia, who has no intention of abandoning her son. This is when Bruno really starts to feel the heat. In addition to Sonia’s rejection of him regardless of his love for her, moral and physical solitude are staring him in the face. Will buying his son back win back her love? A key moment in the film occurs in the sequence in which Bruno decides to save Steve from drowning in the River Meuse. We won’t give the ending away. We’ll leave you to discover it for yourselves.

L’Enfant is an enthralling film, as are all the Dardennes’ previous opuses, but one which, from the director’s point of view, uses more wide shots than Rosetta, which wrapped us in a person’s will to survive come what may, legitimising the presence of a young woman on the breadline and deprived of affection, and for whom work – obtained at any price – was the sole means of salvation. Thus the plethora of Rosetta's back-of-neck shots, is suggestive of emotional isolation and of a person who blindly stumbles forward. The same could be said of Le Fils, where the first shots were often full screen, directed at the back of the neck of Olivier Gourmet, who is torn by contradictory desires: pass the thing on, or take revenge? In L’Enfant, Bruno’s happy-go-lucky attitude – cool, guy, cool – creates a more flexible frame into which Bruno slips, eel-like. The way of making his way in the world, dodging any kind of responsibility including that of a father (for which, unlike mobile phones, there is no User’s Guide). A role less gadget-dictated than he could have imagined, and whose reality and symbolism he’ll take some time to comprehend. More to the forefront here than in previous Dardenne films is their wish to show bodies, gestures and behaviours that show homo sapiens for what he is. Physical cinema-making, therefore, which, nonetheless, does not descend into abstraction or behaviourism: the Dardenne characters are the word made flesh.

The film’s remarkable ending releases an emotion supported by the quick rhythm of a film blessed with the tempo of a thriller. A thriller, did you say? Why not? L’Enfant is not an illustration of the state of the youth of today, marginalised by the consumer society that shapes them. L’Enfant addresses rather than lectures. The Dardennes have produced a fictional film in a documentary fashion, a film of the impulses and urges that govern a certain state of the world (to parody Godard, 95 times 24 images per second), that govern the human race today.
Lest we forget, Jérémie Renier and Déborah François embrace their role with an accuracy of portrayal which is one of the strengths of a film that received the Palme d’Or at the last Cannes Film Festival.

more about: The Child

Diary kept between the end of 1991 and the start of 2005, followed by the screenplays of The Son and The Child, the story of an artistic adventure running to almost two hundred pages

...With Big Brother and Little Brother

"There is no such thing as misunderstanding. Only people who are hard of hearing". (Pierre Rey, Une saison chez Lacan)

Jérémie Renier and Noée Abita to star in Slalom

The feature debut by Charlène Favier, staged by Mille et Une Productions, is being shot in the Alps; the international sales will be handled by Jour2Fête

Principal photography about to start for Territory of Love

Déborah François and Paul Hamy are among the cast of Romain Cogitore’s second feature, which is being produced by Cinéma Defacto with House on Fire and will be sold by UDI

Jérémie Renier, Zita Hanrot and Marthe Keller are among the cast of the filmmaker’s feature debut, which is being staged by ElianeAntoinette and is set to be sold by Pyramide 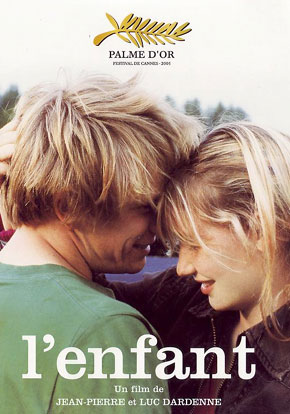