17/03/2006 - Placido’s film liberally recounts the real life events of the Magliana Gang, which between 1977 and 1992 ran the most ambitious criminal operation ever seen in Rome

Based on the eponymous novel by Giancarlo De Cataldo – a judge turned writer who then became a writer turned judge – and scripted by De Cataldo together with Stefano Rulli and Sandro Petraglia (The Best of Youth [+see also:
trailer
film profile]), Michele Placido’s film liberally recounts the real life events of the Magliana Gang, which between 1977 and 1992 ran the most ambitious criminal operation ever seen in Rome. They dominated the Italian capital by controlling all drug, blackmail, prostitution and arms trafficking, modelling themselves after Mafia families. Their ties to the Mafia and politics transformed the gang into a kind of "crime agency” at the service of the highest bidder, and in turn got them involved with the rogue secret service and the extreme right in the most dramatic moments of those years, from the kidnapping of Aldo Moro to the Bologna train station massacre.

Through Luca Bigazzi’s splendid photography, Placido, no newcomer to political films, mixes these public events with the characters’ private lives, in a sort of Once Upon a Time in America set in Rome, an epic saga made up of still-open wounds, bloodshed and betrayal. On this film, the director displayed a surprising sense for the spectacular and used a shooting style that is both jumpy and urgent, illuminated by visionary moments that are simultaneously alternated with the hyper-realism of the action scenes, enhanced as they are by a variety of technical elements (including black screens and superimposed or diagonal shots). There are references to Leone, Scorsese and Coppola throughout the film’s two and a half hours, in terms of the disgust for and attraction towards the young criminals’ actions. Above all, the perhaps unintentional model seems to be Scorsese’s Goodfellas for this "worst of youth" devoid of all morality and a microcosm that reveals a world of dark collusions.

Placido succeeded in pulling something akin to anthropological identification from his cast: Kim Rossi Stuart and Pierfrancesco Favino are excellent in the roles of “Freddo” and “Libanese”, Claudio Santamaria tormented as “Dandi”, Riccardo Scamarcio sinister as “Nero”, Anna Mouglalis seductive and damaged as Patrizia, while Stefano Accorsi struggles to maintain a character as complex as Commissioner Scialoja. Through these young stars’ commitment and involvement, the film seems particularly efficient in portraying the psychological implications of the powerful bonds of childhood that unite these assassins and render them “human” and fascinating. This is the seductive power of evil, to which cinema has always turned, which in turn gives us great bad guys, wonderful gangster stories and romantic scenes. Such as the prologue of Romanzo criminale [+see also:
trailer
interview: Michele Placido
film profile], in which the three main characters, friends since childhood, run from the police, towards the sea, like Antoine Doinel in The 400 Blows.

The third collaboration between the two companies

Placido’s film liberally recounts the real life events of the Magliana Gang, which between 1977 and 1992 ran the most ambitious criminal operation ever seen in Rome

Based on the eponymous book by Giancarlo De Cataldo, Romanzo criminale is the director’s most accomplished and stylistically complex film

Gabriele Muccino homes in once again on his beloved middle-class characters, confirming his filmmaking skill and directorial prowess with a story about love and friendship over the course of 40 years

Everything's Gonna Be Alright by Francesco Bruni enters into post-production

Starring Kim Rossi Stuart in a lead role, the new film by the director-screenwriter of Easy! and Friends by Chance is produced by Palomar in league with Vision Distribution

Review: 5 Is the Perfect Number

VENICE 2019: The first feature by Italian cartoonist Igort, presented in the Giornate degli Autori, goes beyond the clichés of the graphic-novel adaptation

In his sixth feature, Massimiliano Bruno experiments with time travel, genres and the Banda della Magliana criminal gang in a nostalgic nod to the 1980s

Cattleya, which has been awarded the rights to the bestseller by the Norwegian writer, will produce the film, which will be the first fictional feature for the director of Franca: Chaos and Creation

The shoot for Suburra gets under way for Netflix

The first ten episodes of the series will be directed by Michele Placido, Andrea Molaioli and Giuseppe Capotondi; the cast includes Francesco Acquaroli, Alessandro Borghi and Claudia Gerini 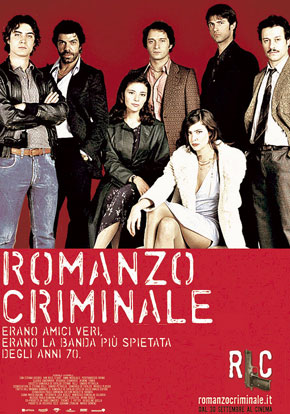