A mixed reception met Critics’ Week title Fresh Air [+see also:
trailer
film profile] this afternoon. The film marks the feature debut of Hungarian director Ágnes Kocsis, who didn’t make it easy for herself by exploring difficult relationships between a mother, who works as a bathroom attendant, and her teenager daughter in crisis, against the backdrop of an austere, lower class Budapest.

Blessed with exceptional cinematography, Fresh Air reveals a director who displays a mastery over depth of field and a style based on still shots, a composition very much inspired by painting, and a refusal to use close-ups, as well as lighting work by DoP Adam Fillenz in the finest Eastern European tradition. In addition, Kocsis links a colour to each character – red for the mother and green for the daughter. However, the crude, simple and somewhat laconic storyline, rooted in the gloom of daily life with no hope in sight, detracts from this aesthetic directing.

With fine performances from Julia Nyako and Izabella Hegyi, the parallel lives of mother Viola and her daughter Angéla only collide in front of the TV, when they watch their favourite show (the Italian Mafia series The Octopus). An examination of non-communication exacerbated by a teenager’s shame over her mother’s obsession with deodorants and seeking a soul mate in the classifieds, Fresh Air recounts the passage from girlhood to adulthood with finesse.

As she aspires to become a fashion designer, Angéla’s life is depicted through intimate details (her private diary, a poster on her wall, conversations with her best friend, platonic friendship discussions on body matters). By the end of the film, the girl has come to loathe her mother’s uniform, which ultimately produces a merciless social determinism that is treated with faultless rigour by Kocsis, and which clearly divided Critics’ Week audiences.

Hungarian filmmaker Ágnes Kocsis returns with a unique, extremely ambitious and formally accomplished film about the tough topic of loneliness in the modern world

Croatia’s Lana Baric and Belgium’s Daan Stuyven topline the film, which is being produced by Mythberg Films and sold by the Hungarian Film Fund

Having turned heads with his feature debut, The Investigator, the director is now working on his second opus, which is being produced by KMH Film

"I want my stories to remain inside"

Andrea Arnold, Teresa Villaverde, Aida Begić and Agnes Kocsis are the directors featuring in the second part of the “Europe: Unique Females” section this year 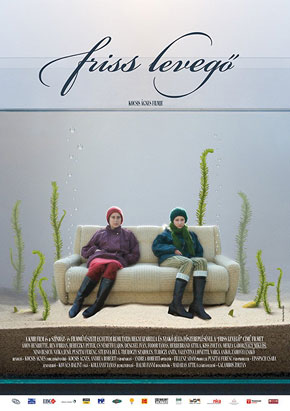