CANNES 2006 Out of competition / France

With Nouvelle Chance [+see also:
trailer
film profile] presented out of competition at Cannes, Anne Fontaine continues the adventures of Augustin Dos Santos, played by her brother Jean-Chrétien Sibertin-Blanc, after Augustin (1994) and Augustin, Roi du Kung Fu (1999). First and foremost an homage, Fontaine explained at yesterday’s screening that the film came about from a meeting with French actress Danielle Darieux.

For Darieux, she invented the character of Odette Saint Gilles, a former acting diva who has been living in a retirement home for several years. Meanwhile, Augustin has had children and given up kung fu for the pleasure of staging small plays that he sells here and there. When he meets Odette and is impressed by how much she loves one of his texts in particular, Augustin decides to put on the play for a group of Swedes visiting Paris. This adventure leads him to cross paths with a famous television actress, Arielle Dombasle, and Raphaël, a handsome young man with whom she falls in love.

With four very different characters, Fontaine returns to a style that suits her very well, to make an unusual, slightly offbeat, tender and crazy comedy. The film is centred on four stories, the love affairs between Augustin and Odette and the TV actress and Raphaël, a crueler affair between two women reminiscent of Joseph Mankiewicz’s All About Eve, and finally, the story of a play. The film reaches moments of immense beauty when Fontaine lingers on Darrieux’s eyes.

Produced by Pascal Houzelot and Philippe Carcassonne for Mosca Films, and co-produced by Cine B, France 2 Cinéma, the film also received funding from the Centre National de la Cinématographie.

Nouvelle Chance will be distributed in France in Autumn 2006 by Haut et Court. International sales are being handled by Films Distribution.

Virginie Efira, Omar Sy, Grégory Gadebois and Payman Maadi star in the F Comme Film and Ciné@ production, to be sold by StudioCanal

Shoot due to kick off soon for Anne Fontaine's Agnus Dei

Huppert and Poelvoorde star in My Worst Nightmare

As predicted by Cineuropa on February 28 (see news), a U.S. major, in this case Warner, has decided to act as co-producer and international distributor of Anne Fontaine’s Coco avant Chanel...

In production since August 23 on the Côte d’Azur and in Paris, Anne Fontaine’s Monaco – starring Fabrice Luchini, Roschdy Zem and Louise Bourgoin – has been added to the line-up of French...

If the first weeks are a prediction for the year to come, then there is reason to rejoice with the cultural diversity of this week’s new releases. Seven new films arrive on screens: three European... 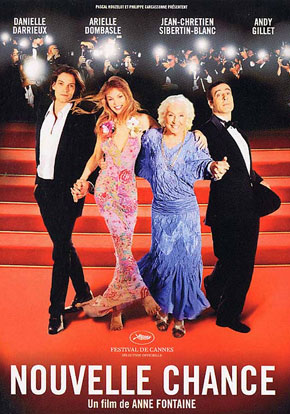