If you are moved by the death of a parakeet at the beginning of The Elementary Particles (Elementarteilchen) [+see also:
trailer
interview: Franka Potente & Moritz Ble…
interview: Oskar Roehler
film profile], you are in for a bumpy ride, as all of humanity as we know it will be wiped out by the film’s end in a brief written epilogue. Of course, those who have read the novel ("Les particules élémentaires" in its original French, Atomised in its UK version) saw this coming, but for those who are unfamiliar with Michel Houellebecq’s cult hit that explosively mixes sex, death and science to annihilate mankind – and blames the flower power generation for it in the process – this might come as something of a shock.

German writer-director Oskar Roehler, who seamlessly transposed the story from its original Île-de-France setting to Berlin-Brandenburg, prefers lingering on the sex (and, implicitly, the possibility of love that might go with it), moving science and death to the background and the downright dark and pessimistic ending into a couple of phrases shown on screen as nothing more than an afterthought. The film’s semi-upbeat ending is indeed its weakest part, but until then, Roehler delivers a most elegant, provocative and strongly acted film on the subjects that have become his trademark: sex, social outsiders, the cruelty of society and the problems the post 1968-generation (to which he himself belongs) have inherited from their parents.

Roehler’s fascination with the French novel is easily explained for anyone who knows his and Houellebecq’s work; in a way they could be half brothers just like the protagonists of The Elementary Particles. They are Michael (Christian Ulmen), a molecular scientist who is the owner of the aforesaid parakeet, and Bruno (Moritz Bleibtreu, who essentially plays a variation on his character from Roehler’s previous film Agnes and His Brothers). They grew up separately with their grandparents while their mother hung out a various hippy communes. They eventually meet in their teens and will keep in contact for the rest of their lives, perhaps attracted to one another because they appear to be polar opposites.

Bruno becomes a secondary school literature teacher who thinks too much about sex and not enough about Baudelaire, while Michael is too absorbed in his work as a scientist to really have much time for love or sex. In any case, his research and experiments on a new type of artificial procreation might make sex completely obsolete in the near future. Roehler, heavily aided by Houellebecq’s strong thematic contrasts and composition, glides through the story effortlessly for the first two-thirds of the film, using his narrative of the two brothers’ day-to-day as a framework for an investigation into the meaning and uses of sex and how people’s obsession with it (or its absence) influences their lives to an unhealthy extent.

Despite its subject matter, however, the film can be considered prudish when it comes to showing sex, though it is perhaps not so surprising seen the all-star line up (including Lola rennt co-stars Moritz Bleibtreu and Franka Potente). The fact that the characters are mostly dressed or, when disrobed, move behind strategically placed bottles and table-tops infect the integrity of the film, though the actors’ work cannot be faulted, as Roehler has orchestrated a near-perfect casting coup. Everyone is pitch-perfect, from Bleibtreu and Ulmen as the two half brothers, right down to the women in their lives (including turns by Potente and Martina Gedeck as their lovers, Nina Hoss as their mother and Corinna Harfouch as Bruno’s therapist) and the younger versions of the brothers (Tom Schilling and Thomas Drechsel – already co-stars in Napola) who appear in flashbacks.

While the tone of the first two-thirds of The Elementary Particles is serious, even bleak (despite numerous moments of comic relief), the last third introduces us to the parents of Franka Potente’s Annabella, who are still living a happily ever-after story and feel peculiarly out of place in the film’s gloomy, doom-day approach to relationships. From that point on many disasters are still to happen but suddenly there is a more than vague flicker of hope for all of the characters, which feels strangely intrusive. The technical package of this two-thirds successful adaptation is of the highest possible level, apart for its generic score and 1970s pop tunes (such as McLean’s American Pie) that can be heard in countless other films.

"Cynicism has no place in cinema"

The colourful comedy is produced by Berlin-based X Filme Creative Pool, which has teamed up with Roehler for the fifth time

Chaired by AngelaLipp-Fläxl, the production funding allocation committee of the German Federal Film Board (FFA) has awarded €3.75m to ten diverse titles, including new projects by important...

This week’s line-up includes some interesting and diverse European releases. First up is German/Austrian co-production Jew Suss: Rise and Fall by Oskar Roehler (The Elementary Particles), which...

At the German Film Awards ceremony, to be held on April 23 in Berlin, the Film Academy will honour the career of producer (and occasional screenwriter-director) Bernd Eichinger with its Lifetime... 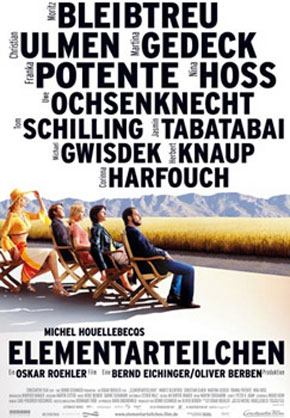