After experimenting with a comic tone in his second feature film, Ça rend heureux [+see also:
film review
trailer
interview: Fabrizio Rongione
interview: Joachim Lafosse
film profile], Belgian filmmaker Joachim Lafosse (read the interview) is back to the same subjects that fed his directorial debut Private Madness: violence between relatives and the unresolved wounds of a family that will dictate its demise.

Starring Isabelle Huppert – who unexpectedly will be absent from the film’s official screening tonight – Private Property [+see also:
trailer
film profile] achieves what other films starring the French actress were unable to achieve: it is a film with Huppert that does not allowing her striking presence to become larger than the film itself.

The actress here plays Pascale, a divorced woman who decides to begin a new life with her boyfriend Jan (Kris Cuppens). This plan includes the possible sale of the house where she lives with her twin sons, Thierry and Francois – played by real life brothers Jérémie and Yannick Renier – whose clear opposition to the sale hides the much deeper fear of losing their mother to another man. The seduction Pascale exercises over the twins – which is far from Honoré’s sexual-oriented plot in My Mother [+see also:
trailer
film profile] – is accompanied by an almost total absence of a father figure, reduced here to the role of a mere source of finances (rather than affection).

With most scenes filmed inside the house that is the object of the family’s disagreement, Private Property has a "huis clos" style that certainly contributes to the uncomfortable rise in tensions. Lafosse’s still shots of family meals are in open contradiction to the character’s disturbing states of mind, which was certainly a more interesting option than the usual hand-held Dogma camera style.

"I wanted each of the characters who wants to move away to have to move off-screen. The frame is like a house that the characters can’t leave", said the director, who dedicated his film not to a person but "to our limits". What does it mean to impose limits and what shall we do once we realise we have broken them?

The destructive dimension of Private Property points, however, towards a cathartic ending: "The film’s conclusion marks the end of one story and the beginning of another. Each of the characters can reconsider his or her family not as a form of imprisonment but as a source of circulation and movement", added Lafosse.

"We engage viewers and make them want to lose their bearings"

We met up with Belgian actor-directors Jérémie and Yannick Renier on the occasion of the release in Belgium of their first film, Carnivores

"There's a simple message at the heart of this project: separation is always defeat"

CANNES 2016: Cineuropa sat down with Joachim Lafosse, who is making his third appearance on the Croisette with After Love, which is being presented in the Directors’ Fortnight

The White Knights: behind good intentions

Emergence: The last clapperboard slams for the winners of the 17th session

The session for the feature-debut projects by Emilie Noblet, Vincent Vivioz, Lucas Bernard, Liova Jedlicki, Julien Guetta and Nicolas Maury has come to an end

Call for applications for Emergence 2015

Six laureates for the 16th session of Emergence 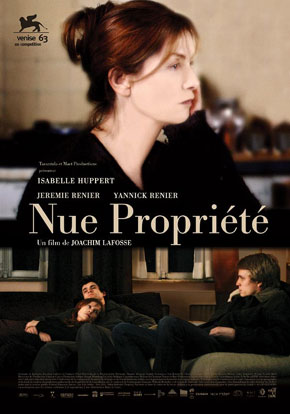