In the bleak Finnish drama Frozen City [+see also:
trailer
interview: Aku Louhimies
interview: Markus Selin
film profile] (Valkoinen kaupunki, which literally means "White City"), the love a father fosters on his children is what keeps him going and what makes us feel for him, even if he has an unstoppable temper and an equally unstoppable flair for saying the wrong thing at the wrong time. The film - which is a continuation of a character storyline involving a taxi driver that started in the Finnish TV series Fragments is clearly part of the tradition of raw, Scandinavian dramas that face emotions head-on, such as the films of the DOGME movement, the non-experimental work of Lukas Moodysson and last but not least director Aku Louhimies’ own previous film Frozen Land (Paha Maa).

Like Frozen Land, Frozen City is set in a Helsinki that is mostly buried under snow and often in the semi-dark, and which the grainy digital cinematography only further reduces to a hostile and unwelcoming environment. Veli-Matti (Janne Virtanen) is a taxi driver (or rather Taxi Driver; several literal references to Scorsese’s Taxi Driver are included for those slow on the uptake) whose violent temper will get him into a lot of trouble. He seems to be the perfect nice guy when with his children, even though his wife has vanished when their youngest child was only a couple of months old. When she returns after an unexplained two-month absence, Veli-Matti realises they cannot go on to live as if nothing happened; he suggests he moves out and they both move on with their lives.

This puts the loving father of three in a weaker position where the kids are concerned: he fights for a fifty-fifty settlement but his wife wants a settlement that will suit her better, even if she was the one who abandoned the family for two months. Veli-Matti tries to do what he can for his children, despite a chronic lack of time and resources, and his actions play like a crash-course in low-budget single parenting: he makes bread buns with his kids, reads to them, takes them on adventures in his dark and unfurnished new flat, cooking pancakes in a pan on a fire inside a pot. When the first form of decoration arrives in the form of a set of - admittedly hideous - curtains, it is the beginning of the end, as fate (or if you prefer, providence, or the machinations of the plot) start to conspire against him. Veli-Matti will be declared guilty of a crime he cannot remember committing and is incarcerated, while his children’s mother will get sole custody.

While Frozen Land (which was a modern update of a Tolstoy story) was a good film, it cast its net too wide; Frozen City’s story is much more compact and Louhimies keeps his focus squarely on his taxi driver and knows how to make him a warm and likeable human being through showing his unconditional love for his children, even when the world around him crumbles and freezes. It is this deceptively simple quality that elevates Frozen City from a simple, low-tech and small-cast drama to a compelling human tragedy of Dostoyevskian proportions.

Aku Louhimies talks about his dark tale of divorce and desperation, an intimate portrait of an essentially good young father driven to desperation and accused of an act he cannot remember committing

Producer Markus Selin heads Solar Films, the company responsible for some of Finland's biggest box office hits but also of some of the country's most critically acclaimed films and TV productions

Award-winning playwright Paavo Westerberg makes his directorial debut with a slick, if slightly uneven, feature shown in the Nordic Competition at the Göteborg Film Festival

Finnish director Aku Louhimies is directing a TV drama about the 1916 Irish Rebellion, in addition to preparing his first English-language feature, Clearance

During the annual awards film ceremony held last Sunday night in Helsinki, Aki Kaurismaki received the Jussi award for Best Film of the Year, for Lights in the Dusk, presented to him by French...

Nordic Film Forum Scanorama, the fourth mini-festival of Nordic films in Lithuania, kicked off in Vilnius on November 10 with the screening of Baltasar Kormákur’s A Little Trip To Heaven and will... 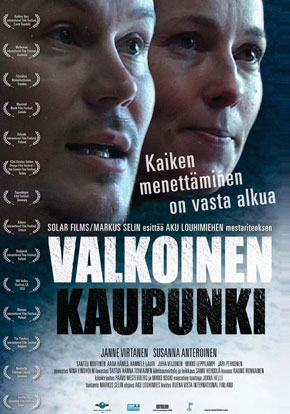