Using those cinematic models capable con forcefully stimulating audiences’ imagination – such as Solaris, 2001: A Space Odyssey and Alien – Danny Boyle has made a feature film that unites action and philosophical science fiction.

If, on the one hand, the film’s $45m budget allowed the eclectic director of Trainspotting to shoot technological sequences in London’s 3 Mills studios that are nothing short of blockbuster US productions, on the other, Sunshine [+see also:
trailer
interview: AndrewMacdonald
interview: Danny Boyle
film profile] place itself among those titles that have contributed to creating the meditative sci-fi (read: that opposes Star Wars) derived from the literature of Stanislaw Lem (who inspired Andrei Tarkovsky’s Solaris).

The eight scientists travelling towards the sun in the spaceship Icarus II, with the goal of exploding a nuclear bomb to revive the star that nourishes our planet, are human beings with ethical questions and needs not far from those of the junky derelicts on a bad trip in Trainspotting. "I want my films to be life affirming, even a film like Trainspotting, which is very dark in many ways,” the 50 year-old director from Manchester once said. "I want people to leave the cinema feeling that something's been confirmed for them about life”.

The director’s vision is thus morally positive, and solidly based in science. Boyle consulted with numerous scientists and astronauts for the film, as well as with NASA in recreating images of the surface of the sun, which burns 600 million tons of hydrogen per second. Sunshine’s main character (played by the angelic Cillian Murphy) was apparently furthermore inspired by the young British physicist Brian Cox, who at CERN, the European centre for nuclear research, is working on a machine capable of recreating the conditions that existed in the first thousandth of a second after the Big Bang.

Behind all these questions on how the universe functions, what are the that governing it and, ultimately, the Promethean desire and Faustian search to dominate the forces of nature there certainly lies the need to encounter God, to come up against Him. Sunshine’s philosophical side is only partially successful, however, as Boyle is more interested in drawing in spectators with successful sequences of a scientific thriller. And maintaining audience attention without resorting to the arrival of evil aliens is no small task.

Deep space as a mirror in which we search for ourselves

The courage of quality

The "golden boy" of UK cinema looks fearlessly into the sun

Director Danny Boyle and writer Richard Curtis have all The Beatles’ lyrics, but this high-concept "Yellow Submarine" doesn’t have faith in anything but schmaltz

An unsettling debut about a possible near future by Alex Garland, screenwriter of 28 Days Later and Sunshine by Danny Boyle

The 54th BFI London Film Festival (October 13-28) kicked off in style with packed screenings of Mark Romanek’s Never Let Me Go, which enjoyed its European premiere in the city’s iconic Leicester...

Trainspotting meets Charles Dickens in Mumbai, the junkies of Edinburgh take Oliver Twist by the hand in the modern India of global contradictions 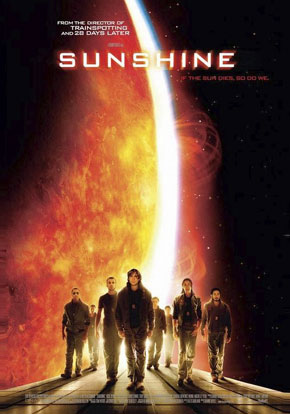