01/07/2007 - Subject and form are combined to harrowing effect for a gripping testimony of life, death and decision-making during the Communist era

On a table covered with a vinyl cloth stands a bowl. In the bowl, a goldfish swims around in circles. All seems normal. There is no one in sight, though for attentive viewers it is clear that someone must not be far off. There is a lit cigarette, barely consumed, lying in the ashtray next to the bowl. Voices are heard. The camera pulls back to reveal Gabita (Laura Vasiliu), preparing to go somewhere, wondering whether she should take her homework with her. As the camera pulls further back, her fellow student Otilia (Anamaria Marinca) comes into view. She is sent off on a hunt for foreign cigarettes, which they will need for their upcoming mission as much as the vinyl tablecloth.

The message of Cristian Mungiu, the writer-director of 4 Months, 3 Weeks and 2 Days [+see also:
trailer
interview: Cristian Mungiu
interview: Oleg Mutu
film profile], in this very first scene is clear: just beyond a view of apparent normality and routine, many other things may lie hidden. With his second feature, which won the Palme d’Or at the recent Cannes Film Festival, Mungiu probes deeply into the wounds of common Communist-era behaviour, which was all about concealing, pretending and hoping to not be discovered.

In 1987 Romania, the two girls from the provinces try to arrange an abortion for one of them. Contraceptives are as rare as doctors willing to perform illegal operations. Prices are extremely high. It is the dark-haired Gabita who is pregnant, though Mungiu instead stays closer to the blonde Otilia, who tries to do everything she can to help her friend but also has other complications in her life, including the birthday party of her boyfriend’s mother at which she will be introduced to his family.

In a film full of intense sequences (some of them graphic), the birthday dinner scene may stand out as one of the most striking. In a single sequence all of Romanian society’s ills are discussed in what sounds like inoffensive table chatter but hides much deeper truths. What makes it even more uncomfortable is that it again plays with what is hidden off-screen. While Otilia is forced to socialise with her possible future in-laws, Gabita has been left in a hotel room, waiting for the effects of the abortion procedure to take place. For the duration of the dinner, Otilia and the audience know nothing about Gabita’s fate.

Like all the scenes in the film, the dinner is shot in one long take that combines a prolonged fixed position with camera movement that follows a character either at the beginning or the end of the scene. Mungiu and cinematographer-producer Oleg Mutu have constructed a film of off- and onscreen contrasts, of movement and stagnation, of being boxed in by the frame and operating outside of it, with the cinematography reinforcing the film’s themes at every turn.

What emerges is a picture of a society in which the foreign cigarettes that are used to bribe everyone acquire an importance that betrays the country’s lack of normal social interaction and the development of a set of shared values. The doctor that performs the abortion (played with unusual intensity by Vlad Ivanov) demands a price that is not so much the result of the fact that he could end up in jail for his actions but of people’s all-devouring fear of being found to not be toeing the party line.

This creates a black market where commodities both material and immaterial are available for the highest bidder and some are forced to pay literally devastating prices. Such is the case for Gabita and Otilia, whose worries are not dictated by their own moral upbringing but by the rotten political system that pervades all aspects of their lives.

Producer and director of photography

Cineuropa spoke with the director of the 2007 Palme d'Or winner at the Transylvania International Film Festival, where the film had its Romanian premiere

Subject and form are combined to harrowing effect for a gripping testimony of life, death and decision-making during the Communist era

“Auteur cinema is about films that are not ready-made products”

We talked to the distributor about the landscape of film distribution in Belgium and the Netherlands, the strategy of his company, and the impact of the pandemic

"For us, the theatre experience is crucial"

We take a look at the latest film of Romanian auteur Radu Muntean, which had its Italian premiere at the 30th Trieste Film Festival 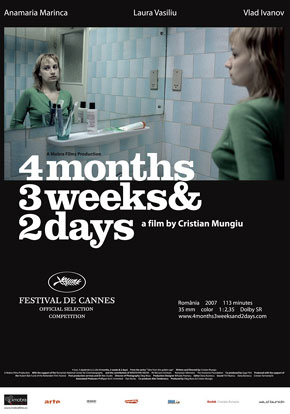