ROMEFILMFEST Alice in the City

Roman audiences get into Mom’s Head

The Alice in the City section of the ongoing RomeFilmFest offers a total of 14 films made for and by young people. Besides film professionals and regular festival-goers, the films are also shown to local school audiences. In the case of today’s Alice in the City title In Mom’s Head [+see also:
trailer
film profile], the youngsters reserved the film a warm welcome.

The first feature film of French director Carine Tardieu is an unusually dense story about everyone’s right to happiness as seen from the perspective of Lulu (Chloé Coulloud), a boyish 15-year-old who pulls no punches. There are times she would like to hit everyone at school in the face – and in some cases she actually does – while at home she worries about her ill and depressed mother Juliette (the always dependable Karin Viard).

There are times she wishes her mother would be dead, but when she discovers that before her birth Juliette used to be happy with another man (Kad Merad), there is only one thing she can think about: track the man down so her mother can be happy again, a supportive and loving father (Pascal Elbé) notwithstanding.

“It is more important for Lulu to see her mother smile rather than follow any strict moral code,” the director explained in Rome during a Q&A session with local pupils. “For adolescents it is important to understand that their mothers are women too.”

In Mom’s Head combines moments of magical realism with very truthful and realistic scenes that directly touch on the life of adolescents in a family context. It does not shy away from swear words, nudity, sex and ugly character truths, which makes the film refreshingly honest (and unsuitable viewing for primary school children).

more about: In Mom's Head

Our Children and Broken shine

After good reviews in Cannes, Belgian director Joachim Lafosse and British director Rufus Norris’ films are out in France

At the age of nine, Rachel discovers that Barbie is a bitch, that death exists, that her best friend isn’t invincible and that her schoolteacher is no longer a virgin. This is the starting point...

Today is the last day of shooting in Brittany on Julien Maury and Alexandre Bustillo’s second feature: Livide. After terrorising audiences at Cannes Critics’ Week 2007 and the Toronto Film...

Jacques Gamblin (nominated for the Best Actor Cesar 2009 for The First Day of the Rest of Your Life) and Sara Forestier (to be seen as of January in Gainsbourg, je t'aime... moi non plus) started...

Roman audiences get into Mom’s Head

The Alice in the City section of the ongoing RomeFilmFest offers a total of 14 films made for and by young people. Besides film professionals and regular festival-goers, the films are also shown...

After London and Berlin, the third edition of Up and Coming Stars, the event organised by Unifrance to promote young French film talent outside their home country, is being held at the... 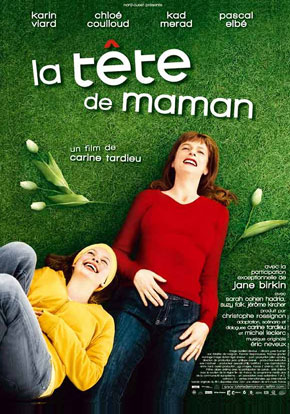