19/03/2008 - The remarkable adventure of a Flemish film phenomenon. This unusual debut feature won multiple awards at the Montreal Film Festival and has sold to 32 countries.

Even before its theatrical release, Nic Balthazar’s Ben X [+see also:
trailer
interview: Nic Balthazar
interview: Peter Bouckaert
film profile] was already more or less guaranteed to be a success, thanks to a well-orchestrated promotional campaign. Winner of the Audience Award and the Ecumenical Jury Prize at the Montreal World Film Festival, chosen as the Belgian hopeful for the 2008 Best Foreign Language Film Oscar and selected in the Generation14 competition at the Berlinale, this debut feature has sold to 32 territories and plans are currently underway for a US remake.

Having garnered over 260,000 admissions, Ben X claimed 17th place at the Belgian box-office in 2007 even though it was only released in Flanders and Brussels. The film is set to be launched by Kinépolis in French-speaking Belgium on March 19 and will hit French screens on the same day (distributed by Océans Films). This level of popularity was to be expected given that the film emerged from a series of successes.

Ben X is adapted from a book that Balthazar was originally commissioned to write for a young audience, with the aim of encouraging them to read. Freely inspired by a tragic real-life event (the suicide of a young autistic teenager bullied to death by his classmates), the book enjoyed unexpected success before being adapted for the theatre, where the stage version was met with equal enthusiasm.

Erwin Provoost (MMG Production) – who discovered directors such as Marc Didden, Stijn Coninx and Dominique Deruddere and has notched up several Belgian box-office hits in recent years (The Alzheimer Case, Windkracht 10, Vermist) – suggested to Balthazar that he write a screen adaptation himself. The suggestion was taken up by the debut filmmaker, who thus followed his character’s maxim: “All you have to do is dare”.

Ben X is also the first film entirely produced by Peter Bouckaert (Provoost’s partner) and marks the big-screen debut of young actor Greg Timmermans, who plays Ben. Assisted by seasoned professionals such as the DoP Lou Berghmans and editor Philippe Ravoet , Balthazar made Ben X on a modest budget of €1.5m with the ambition of making a mass-appeal film. He was bold enough to film scenes in cyberspace (a first in cinema), the MMORPG (Mass Multiplayer Online Role Playing Game) Archlord, which is Ben’s hobby.

Ben X plays on different levels of reality and points of view. As well as video game images, the film also incorporates flashbacks – evoking Ben’s memories – and often gets very close to the character by using subjective camera shots. The film includes narrative sequences spoken by Ben as he faces the camera, creating a quasi-documentary effect and enhancing the dramatic structure of the film, for these sequences appear to have been recorded after the denouement. The film sets up several stories within the main story and involves a series of sudden twists and turns.

Ben X manages to entertain and move the viewer, by depicting the profound anguish, personal struggle and suffering endured by the protagonist. As a young autistic teenager with Asperger’s syndrome, Ben tries to lead a normal life, but he becomes the victim of increasingly violent bullying from his classmates. On the Web, however, he is a hero. His video game enables him to find the strength and means to defend himself in a dramatic final twist.

With its highly stylised images, rapid editing and suspenseful narrative, this debut film cleverly targets its audience, taking viewers by surprise and drawing them into the story, delivering its message with sensitivity. But above all – and perhaps this is the main source of its success – Balthazar has transformed the banal backdrop of a school and the potentially difficult story of an autistic teenager, and created a tale of mythic proportions, elevating his character to hero status.

"Doing everything ourselves, taking risks and persuading"

The remarkable adventure of a Flemish film phenomenon. This unusual debut feature won multiple awards at the Montreal Film Festival and has sold to 32 countries.

“You don’t find a story, the story finds you”

Journalist, film critic and Flemish TV presenter, Nic Balthazar has gone behind the camera to direct a screen adaptation of his book Ben X. He looks back over an unusual cinematic journey

In Say Something Funny, Nic Balthazar and Peter Van Den Begin ask some existential questions: how can you make people laugh when you’re depressed?

Back to business for Jan Verheyen with Het Vonnis

In an 11th session with a Flemish twist, Wallimage/ Bruxellimage chooses two films to star Matthias Schoenaerts, De Behandeling and The Waste Land

Time of My Life for Balthazar, whose Ben X sells for remake

While Belgian director Nic Balthazar’s new feature Time of My Life last month took near to 65,000 admissions in its first ten days of domestic release (it will be launched at this year’s European... 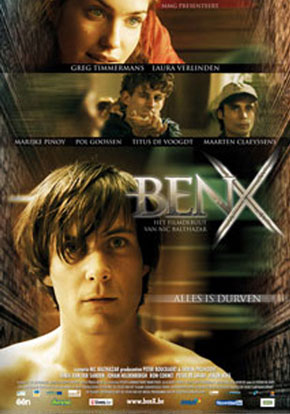