29/04/2008 - Radu Muntean directs Dragos Bucur once again, in a powerful film about family, friends and feeling like doing it all over again

It’s times when being 30-something, with a wife and child, travelling to the seaside for your May Day holiday that you get to thinking about your life. Radu Muntean’s Boogie [+see also:
trailer
interview: Dragos Vîlcu
interview: Radu Muntean
film profile] is striking for its brave and universal story: the life and lies of a guy in his mid-30’s and his apparently unprovoked teenage-like crisis.

Boogie is the nickname of main character Bogdan Ciocazanu, played by one of the filmmaker’s favourite actors, Dragos Bucur. He is by all accounts "an accomplished man with a busy phone", the owner a small furniture factory. On a traditional Romanian Labour Day vacation at the sea with his wife Smaranda (Anamaria Marinca) and three-year-old son Adrian (Vlad Muntean), Boogie meets his former best friends from high school, Penescu (Mimi Branescu) and “manager” Iordache (Adrian Vancica).

Screenwriters Razvan Radulescu, Alexandru Baciu and Muntean do a great job of capturing a very problematic period in a man’s life. Penescu and Iordache are the kind of evergreen guys that hang around looking free and available, readily preaching about how great it is not to have some pregnant, sour wife and demanding child to keep them from enjoying life. Which is precisely what they do when they meet Boogie.

Right from the start, Boogie behaves like a teenager: watching some crazy guys bathing in the freezing water, he can’t resist going in for a swim, despite Smaranda’s wise advice. Later that evening, the tension builds as it becomes clear that Penescu, Iordache and Smaranda are not getting along very well.

With Boogie and his friends acting more like "grown-up kids" than adults, reminiscing about their lives, Smaranda decides to take Adrian back to the hotel and leave the guys to their fun, unrestrained by her presence.

Boogie takes advantage of this momentary freedom to spend the night reliving his youth with Iordache, who actually works as a dishwasher in Sweden, and Penescu, who is tired of his obscure job at a tourist agency. All through the night they discover that things are not what they used to be and the generation gap is much deeper than Boogie expected – it is not only a question of age difference and things are all but simple.

Wandering through a club, Boogie looks at the women with astonishment: "Are they whores? Are they girls with their boyfriends?" he asks Penescu. “They’re whores with their boyfriends,” his friend replies, making it clear that even though they physically look like they belong there, psychologically some things have clearly changed.

DoP Tudor Lucaciu does another great job, after his outstanding work lighting up a darkish December 1989 Bucharest in Muntean’s The Paper Will Be Blue. He plays with colours and contrasts here, rather than the grey-blue tones he mastered on the previous film. Single-take, handheld scenes again put his skills to the test and he succeeds in creating the perfect ambiance of a seaside vacation in a very dramatic way.

Even though Muntean and Lucaciu deny audiences visual and emotional satisfaction – with at least a few close-ups to add intensity to the inner psychological conflicts – brilliant acting by Branescu, Bucur and Marinca and a great screenplay get the story safely through to the end and give everyone something to think about.

Radu Muntean directs Dragos Bucur once again, in a powerful film about family, friends and feeling like doing it all over again

"Raising money from abroad is difficult"

After executive producing Radu Muntean’s debut feature The Fury, Dragos Vîlcu turned to producing on Muntean’s The Paper Will Be Blue and Boogie

"I must be hard-working"

The first Romanian "New Wave" director to release a third feature, a simple and humane portrait of his generation

Dogs and Like Crazy stand proud on Bac Films’ slate

The feature debut by Romanian director Bogdan Mirica will have its premiere in Un Certain Regard, while Italian filmmaker Paolo Virzi’s movie will be premiered in the Directors’ Fortnight

Spaniards and Romanians come together in Hawaii

The shoot is currently under way for this movie being directed by Spanish filmmaker Jesús del Cerro, and starring Balkan actors Dragos Bucur, Cristina Flutur and Andi Vasluianuis

CANNES 2015: Radu Muntean unveils a highly subtle and skilfully staged psychological film about a man at odds with his conscience

The shooting of America, Here We Come! starts in Bucharest 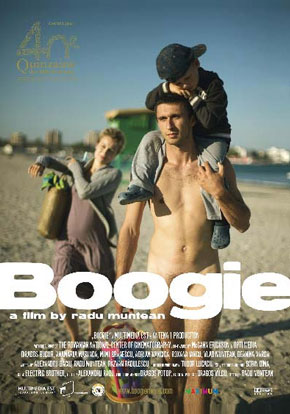 BERLINALE 2020: We talked to Brigid O'Shea, one of the founders of the Documentary Association of Europe, which is having its official launch at the Berlinale on Saturday 22 February

BERLINALE 2020: German director Lin Sternal talks to us about her documentary Perro, which revolves around a threatened indigenous community in Nicaragua and is screening in Generation Kplus