Machan [+see also:
trailer
film profile], the feature debut by producer-turned-director Uberto Pasolini (Palookaville, The Full Monty), screened to a full house and a standing ovation at the Venice Film Festival today. Based on a true story, the film recounts the trials and tribulations of 23 Sri Lankan men who created a phony handball team in order to participate in a Bavarian tournament and escape to Europe. Combining humour and drama, it hit all right buttons with the audience.

Pasolini, nephew of Luchino Visconti, says the project came about as a result of “arrogance, production and luck.” The latter came in the form of a newspaper article he happened to read the day that a Hollywood blockbuster he was working on in Australia fell through after seven months of preparations. Machan was originally intended for another director, but, says Pasolini, “after developing the project for six months, I was too in love with it to hand it over to someone else and arrogant enough to think that I could do it myself.”

With co-screenwriter Ruwanthie De Chickera and Sri Lankan producer Prasanna Vithanage he achieved authenticity by constructing not only the story directly around the experiences and difficulties of the people he met on the streets of Colombo, but also the characters and most of the dialogue. The film is spoken in English and Sinhala and features a cast of almost entirely non-professionals, with the exception of locally renowned actor Mahendra Perera, who accompanied the film on the Lido with co-star Dharmapriya Dias.

Perera corroborated the authenticity and said of the director: “He came close to our emotions and our culture. He almost became a Sri Lankan!” In addressing the fact that Pasolini speaks no Sinhala, Dias added: “Language was not a problem because this film is about human emotions.”

The film will be released in Italy by Mikado on September 12, in Germany in the second half of October. It is being handled internationally by German sales agent Beta.

“A low-key film on the value of life”

Still Life, in the cemetery with a panoramic view

A second go in the director’s seat for the producer of Full Monty who made an intense film on loneliness and belonging.

Arvin Chen’s award-winning gangster comedy Au Revoir Taipei, which was presented in the Berlinale Forum section and at the market by German seller Beta Cinema, continues to attract interest from...

Released last Friday by Scanbox Entertainment, Knerten, the directorial debut of Norwegian actor/stand-up comedian Åsleik Engmark, has had the best opening ever for a Norwegian children’s film,...

Croatia's largest international film event, the Zagreb Film Festival, will have its biggest programme ever, with over 160 screenings in nine sections for its seventh edition, to be held October...

This Is the End, according to Larrieu brothers

Among the eight new releases hitting theatres this Wednesday, Wild Bunch Distribution is launching Arnaud and Jean-Marie Larrieu’s original This Is the End, which was unveiled on the Piazza Grande...

Riconoscimento per Giulio Manfredonia a Shangai 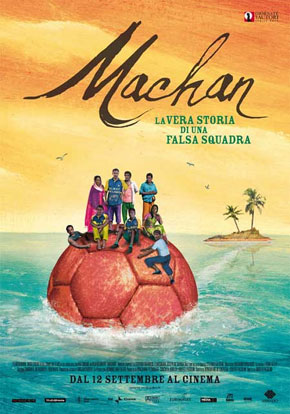