14/10/2008 - Isabelle Huppert and Olivier Gourmet star in the debut feature by the rising star of Swiss film. The drama has touches of poeticism and flirts with the comic genre

As Meier put it, this film – set behind closed doors – is rather like a "road movie in reverse". In the middle of the countryside, a father, a mother and their three children live happily on the edge of a motorway that has been disused for the past ten years. When the road works are suddenly completed, and the first cars drive past, the opposition begins.

The little house on the prairie versus the dreadful road with all its din and pollution: the metaphor appears clear-cut and the confrontation rather Manichean, but Home’s true subject is elsewhere. Just like the struggle experienced by the young female athlete in Strong Shoulders, this is above all an inner battle.

For the steady flow of cars disrupts the harmony of this close-knit family, and they are hounded into a corner. Refusing to leave their little island of tranquillity, this modern-day Swiss Family Robinson dig in their heels, contrary to good sense and to the point of losing all reason.

The directorial style echoes the unfolding narrative, with the hand-held camerawork and jumpy editing of the initial scenes giving way to a more static and sober approach later on. The scale of the shots and the composition of the images (a view from a window which creates a frame within a frame, etc.) reflect the deadening isolation of the characters.

The superb cinematography by Agnès Godard – Claire Denis’ loyal DoP – echoes their descent into hell: the luminous landscapes and bright colours of the start of the film give way to profound blackness and darkness.

The director has also carefully chosen the film’s soundtrack. Engine noises and the cracklings of the radio become symbols of a harmful outside world, contrasting with the peacefulness of the natural landscape around their house. The music – which includes classical and heavy metal, Django Reinhardt and Dean Martin – plays an essential dramatic role and is delightfully varied.

This blend of different genres is also found in the film ‘s tone, which is alternately comic and poetic, and in its refusal to be pigeon-holed or reveal any cinematic references – although viewers can’t help but be reminded of Jean-Luc Godard’s Week-end and Michael Haneke’s The Seventh Continent. With this masterful and impressive auteur film, which is radical without being austere, Meier makes a unique contribution to European cinema.

A taste for sharing

Co-produced by France and Belgium, Home is a Swiss-initiated project led by Thierry Spicher and Elena Tatti

A road movie in reverse

Isabelle Huppert and Olivier Gourmet star in the debut feature by the rising star of Swiss film. The drama has touches of poeticism and flirts with the comic genre

Ursula Meier to make her English-language debut with Quiet Land 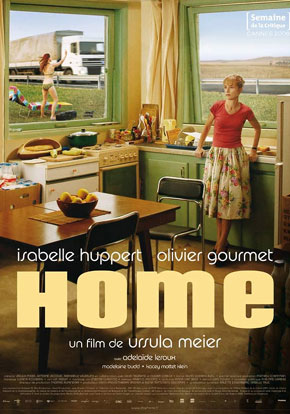