As it slowly draws to a close, the Estoril Film Festival yesterday presented the local premieres of several titles previously seen in international showcases.

Seen in Venice Days this year (see news), Hooked received just a lukewarm reception despite the interesting visual choice by Romanian director Adrian Sitaru: the story about a couple on the verge of separation uses subjective point-of-view at all times.

Tulpan, on the other hand, was received with warm applause. In the film, which won a prize in Un Certain Regard at Cannes 2008, director Sergei Dvortsevoy captures the life of a family of shepherds in Kazakhstan in a style very close to documentary. With long sequences of local rituals and singings, intimate family portraits and the thrilling birth scene of a sheep, Tulpan is not simply a sociological experience but also a subtle reflection on the role of women in that part of the world and an unfulfilled love story.

The mysterious Tulpan (whom we see only once, in a distant shot of her long hair) rejects shepherd Asa’s marriage proposal because his ears are too big. But that is just a pretext for her to leave the region and attend university in another town, a decision very much supported by her mother and against her father initial objections.

As she was Asa’s only hope for marriage in that deserted region, he will have to reshape his dreams and struggle to gain independence from his brother-in-law’s castrating influence. The film has a melancholic tone that is nevertheless balanced out by funny and tender domestic scenes.

A large international co-production led by Germany’s Pandora Filmproduktion, Tulpan is being sold internationally by The Match Factory.

CANNES 2018: Through the latest work by Kazakh filmmaker Sergey Dvortsevoy, we undergo a taxing physical experience alongside a young Kyrgyz mother, living illegally in Russia

The German sales agent is bringing a motley crew of dreamers, dancers, monsters and thieves to the Croisette

Nuri Bilge Ceylan, Yann Gonzalez and Sergey Dvortsevoy are all now in the race for the Palme d’Or. Lars von Trier will feature out of competition, while Terry Gilliam will close the festival

Serial impostor inspires For a Son and Chameleon 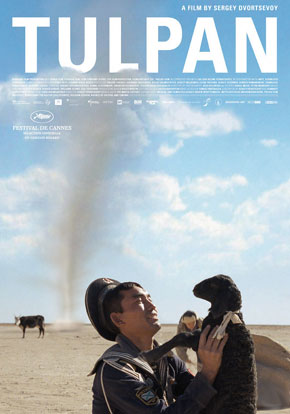 For the first time the Peruvian film maker has used someone else’s material for one of her projects, and she talked to us about it and plenty more