The film is an organic extension of Petzold’s oeuvre and reunites the director with Nina Hoss and Benno Fürmann, who also headlined his 2003 effort Wolfsburg. Like that film, Jerichow is named after the East German town where most of the events transpire.

More so than any of his previous films, Jerichow has a pecuniary focus. Former soldier Thomas (Fürmann) and sexy Laura (Hoss), the wife of Thomas’s new boss Ali (Hilmi Sözer), both have enormous debts. After they get to know each other through Ali, a fiery passion ignites, but they need the self-made man of Turkish origins to keep their creditors at a safe distance.

Aided by some gorgeous, mostly sun-lit widescreen photography, Petzold lets his story unfold with the logic of a Greek tragedy. All three characters hide secrets from one another, until everything ends in an explosive final scene that is as good as anything Petzold has ever filmed.

Along the way, they struggle to live a decent life with a “big heart” is illuminated. Because the characters are not precise allegorical representations of East and West or any economical system, their personal dramas are all the more captivating.

Jerichow was produced by Schramm Film Koerner & Weber, in co-production with Bayerischer Rundfunk and Arte and with backing from BKM, DFFF, FFA and Medienboard Berlin-Brandenburg. Sales are handled by The Match Factory, while Piffl Medien distribute the film in Germany.

After his participation in competition at Berlin with Ghosts and Yella, the selection of Jerichow at Venice strengthened the reputation of the director of the "Berlin school"

BERLIN 2018: To stick with the theme of emigrants awaiting the continuation of their journey, in abandoning a two-level approach, Christian Petzold helms a film that ends up missing the boat

The French distributor is also making a name for itself in the field of international sales, and its slate includes the Bear hopeful Felicity and Beauty and the Dogs

The new film by Christian Petzold, Phoenix, has as its heroine a woman who returns disfigured from a concentration camp. Cineuropa interviewed the German director 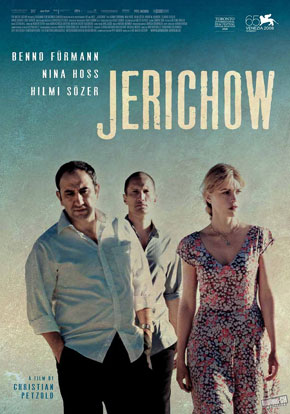