Llosa’s Milk of Sorrow a triumphant ode to life

As the Berlin International Film Festival nears its end, the major film that festival-goers have been waiting for in this year’s competition has finally arrived, via Spain – the first ever Peruvian title in Official Competition. Claudia Llosa’a The Milk of Sorrow [+see also:
trailer
film profile] – a beautiful, rich, captivating and masterful film with which it is difficult to find fault – is profoundly moving yet sober, leaving no room for crocodile tears.

The highly evocative original title ("la teta asustada" means "the frightened breast") refers to the name given by Peruvians to a disease originating in the terror of war, which is carried in the breast milk of women who were raped. Fausta (played by the beautiful Magaly Solier, who also composed the songs through which her character often expresses herself) has inherited the disease from her mother – the aptly-named Perpetua – who dies in the first scene.

Fragile Fausta is so fearful that she has buried a potato inside her body like a tumour, blocking entry to potential rapists, and her relations with others are totally subtle and delicate. However, whilst trying to raise money for a funeral, she slowly learns to let go of her fear and shame.

Opening with a death, this colourful film is in fact an ode to life and includes several exuberant wedding scenes. Moreover, in this culture everything is intermingled: even life and death coexist (as in the juxtaposition of wedding dress and shroud, on and under the bed). And death, with its little worms, is linked to fertility.

This cycle goes hand in hand with the notion of transmission, which is at the heart of the plot. Like the potato ("which grows roots and at the same time produces shoots that reach out to the future", commented Llosa), Lima is associated with traditions and Quechua, on the one hand, and modernity on the other, without contradiction.

The Milk Of Sorrow is a true treasure trove for its characters; inventive details that often take on a symbolic value (like a dug grave that becomes a joyful swimming pool); its subtle portrait of a culture in which opposites coexist harmoniously and protect one another like the families; and its music and cinematography. Based on a carefully gathered "barbarity of information", joked Llosa, the film won over the Berlin World Cinema Fund while still just a screenplay. In the spirit of the film, perhaps the Berlinale will complete the cycle with an award.

more about: The Milk Of Sorrow

Review: The Saint of the Impossible

The French distributor is also making a name for itself in the field of international sales, and its slate includes the Bear hopeful Felicity and Beauty and the Dogs

Magallanes: The past will always come back to haunt you

The debut film by Salvador del Solar is a production between Spain, Peru, Colombia and Argentina, which reopens social and personal wounds that have not yet fully healed

Aronofsky’s jury is all present and correct

Jour2Fête pins its hopes on A Street in Palermo

Berlinale: Claudia Llosa’s new shot at the Bears with Aloft

Resnais, Llosa and Graf competing for the Golden Bear 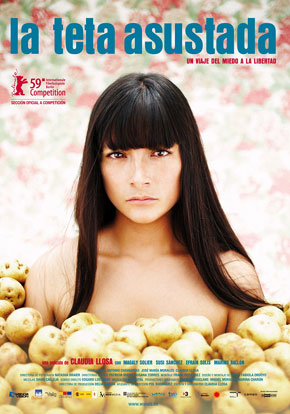