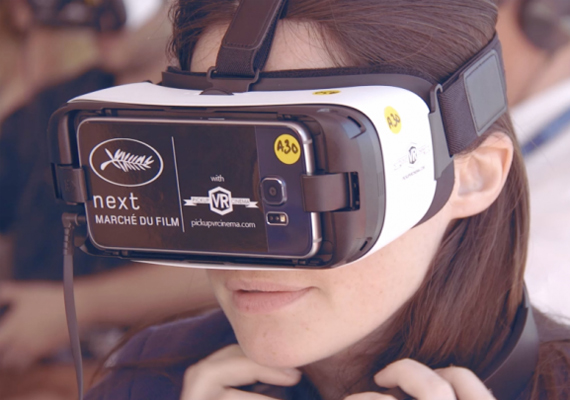 For the fifth time, the Cannes Film Market (8-17 May) will host NEXT, the most innovative hub in the film industry, which continues to evolve every year. Starting today, 8 May, and running until 13 May, incorporating one extra day compared to last year, this edition of NEXT will become more than a virtual-reality market, as the focus will be on the blockchain and cinema virtual reality experiences (VREs). Even the venue is increasing in size: NEXT remains firmly at the festival’s heart, unspooling in the Palais des Festivals et des Congrès, level -1, and as well as keeping aisle 14, it is also expanding to aisle 18.

The Blockchain Corner – located in aisle 18 – is the newest NEXT hotspot. It will remain open beyond the duration of the initiative, until 17 May, and is to be inaugurated by six major companies that will introduce the new technology to the Cannes Film Market guests. Sweden’s Cinezen, Germany’s Cinemarket, Russia’s TVZAR, Australia’s Dream Channel, the USA’s SingularDTV, and Cinemawell from Ukraine and the USA will showcase their services and organise a series of conferences and discussions to further explore the advantages of blockchain for the film industry, such as its use in new business models related to financing and distribution. It’s worth noting that the closing keynote speech will be given by Eric Peters, senior adviser in the cabinet of Mariya Gabriel, the European Commissioner for Digital Economy and Society, who will discuss the European Blockchain Partnership that was signed by 22 countries last month.

Jérôme Paillard, executive director of the Film Market, is a big supporter of this new digital opportunity: “Blockchain is a new, transparent and reliable way to identify and track transactions through the whole value chain in the film industry. I’m convinced it will play a strong role in years to come, facilitating the financing and distribution of films.”

As was the case last year, in the familiar surroundings of aisle 14, Film Market badge holders will have the opportunity to explore the latest VR experiences in over 1,500 m² dedicated to immersive cinema – and in three different ways. More exhibitors are being hosted at NEXT this year, making it possible to showcase a total of over 150 VREs – double the number compared to 2017 – in their booths. Furthermore, the simultaneous and collective cinema experience continues at NEXT’s VR Theatre, where 30 viewers can attend one of the 25+ curated market screenings that have running times of between 30 and 45 minutes, and are available during the whole day. Finally, all of the VREs will be available at the three VR Video Libraries, which use different set-ups – one is powered by Diversion Cinema, using mobile technology; another by VR Connections with Hestia, a plug-and-play, all-in-one-solution for VR location-based distribution; and the final one by DDD60, offering a server-based high-quality VR library.

NEXT’s exclusive conference room will also host a series of 25 conferences that will help the industry to better understand and navigate the upcoming digital era. Some of the topics that will be discussed are “Blockchain - How Will It Change Sales, Distribution and Funding?”, “Financing and Monetising Immersive Content”, “Cinema VRE and the Future of Immersive Technologies” and “Artificial Intelligence: The Emerging Tool for Non-Linear Storytelling in VR”.

Julie Bergeron, head of Industry Programmes, offered a wider overview of the VR aspect: “The number of VR experiences has doubled from last year at NEXT, and big players are exhibiting. It definitely looks like virtual reality is now part of the film industry, with US studios including VR tie-ins in their marketing strategies. Also interesting is the evolution of the technologies being used to exhibit VR. At NEXT, we will allow people to experience VR in various different ways.”

You can find this year’s full NEXT schedule here.

Crítica: From the 84 Days

Crítica: The Story of Looking